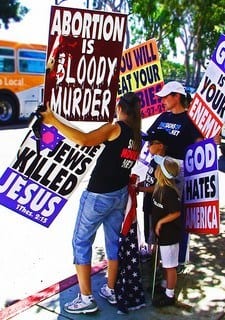 500 people show up to turn away picketers

The days immediately following the Boston bombings offered a rare period where politicization and sharp rhetoric were almost non-existent; personal attacks and petty debates were put on hold as pundits shut their mouths and let the tragedy speak for itself.

Well, not every pundit stopped talking. One organization used the tragedy-induced silence to make their voice as loud as ever.

The Westboro Baptist Church announced earlier this week that they planned on picketing the funeral of Krystle Campbell, the 29-year-old victim of the explosions at the Boston marathon.

“BREAKING: Westboro Baptist Church to picket funerals of those dead by Boston Bombs! GOD SENT THE BOMBS IN FURY OVER FAG MARRIAGE! #PraiseGod,” read a tweet written by the Church.

“God sent the Boston Marathon Bombs for the sin of Massachusetts passing same-sex marriage!” read another tweet by the group.

Fortunately, the Church never got the chance to picket the funeral. You can thank the Boston chapter of the Teamsters (Local 25) for that: they decided to make a human chain to prevent the picketers from entering the area.

Originally, the Teamsters were hoping for around 300 members. But word spread around, and the Teamsters alone gathered 500 members to form the chain.

Combine that with hundreds of people lining the streets, and the Westboro protestors were no where to be seen. According to the Teamsters, they never even showed up.

One thousand mourners attended the funeral, and some waited in line for an hour-and-a-half to see pictures of Campbell’s life.

What does this no-show mean for the Church? Has God sent a message to Westboro, telling them to lay off?

Maybe not, but Boston surely has.