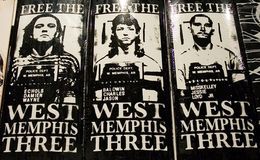 Men pleaded guilty as part of a deal

As we previously reported, a 10 a.m. hearing in Jonesboro, Arkansas was scheduled for Damien Echols, 36, Jason Baldwin, 34, and Jessie Misskelley, 36, who were convicted of killing three 8-year-old Cub scouts in 1993 and leaving the bodies in a West Memphis, Arkansas ditch. Echols was initially sentenced to death, while Baldwin and Misskelley were given life sentences.

Even though the men continued to plead innocent, Misskelley confessed as part of a deal. If they pleaded guilty, they were offered freedom in exchange for giving up the right to sue the state and acknowledging that the state had sufficient evidence to find them guilty in previous trials, NPR said. However, defense attorneys claimed police took advantage of Misskelley’s low IQ.

For several years, many thought the men were wrongfully convicted. Recently, DNA tested from the scene of the crime did not match Echols, Baldwin or Misskelley’s genetic makeup.