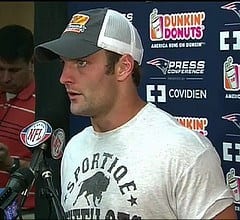 The NFL’s best slot receiver is heading to the Broncos

The NFL’s premier slot receiver has left one elite offense and joined another in a surprising move that highlighted the second day of NFL free agency.

Wes Welker, who spent the previous 6 years with Tom Brady and the Patriots, has been signed by the Denver Broncos and will now be catching balls from Payton Manning. Welker’s contract spans 2 years and pays out $12 million, with an extra $2 million of incentives.

The Broncos predict the Manning-Welker combo will be among the most effective of any quarterback-receiver combination; in 2012, Manning completed a NFL-best 71% of his passes to slot receivers.

Broncos executive vice president of football operations John Elway took to Twitter to offer his comments on the signing.

“Excited to have Wes join the Broncos…his production [and] toughness will be a great asset,” Elway tweeted.

He went on: “Anytime you can take a player from a team you have to compete against, it helps, especially the caliber of Wes Welker…New England is there year in and year out and that’s a team we have to beat to get where we want to get.”

Tom Brady, according to ESPN, was “bummed out” about Welker’s departure, and it’s hard to blame him. Welker caught 118 balls in 2012, racking up 1,354 yards and six touchdowns. He has caught the most passes in the NFL since 2007, and has been to five consecutive Pro Bowls.

Broncos cornerback Champ Bailey knows Welker well; the Broncos have played the Patriots five times since 2007. Bailey is glad he doesn’t have to face Welker anymore.

“He is hard to deal with, a nightmare match up every week,” Bailey told USA Today. “People will say that Brady does it, but he still has to get open, has to make those catches.”