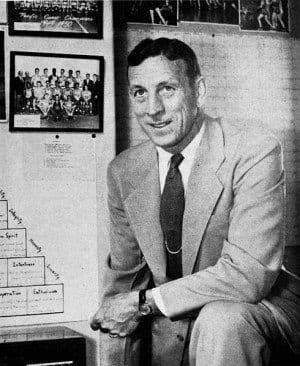 John Wooden statue to be erected at Pauley Pavilion

John Wooden, the legendary UCLA coach died in 2010. Now, Wooden is being memorialized at the pavilion that brought him so much success.

The LA Times reports that a statue of Wooden will be erected at Pauley Pavilion. The Pavilion has been closed for renovations and will reopen in 2012. Wooden’s statue will be erected on the new plaza on the building’s north side along Bruin Walk, Athletic Director Dan Guerrero announced Tuesday.

Wooden’s statue will be sculpted by Blair Buswell, head sculptor for the Pro Football Hall of Fame in Canton, Ohio.

It will not be the first UCLA-related item to be dedicated to the legendary Wooden. The pavilion’s basketball floor was named the “Nell and John Wooden Court.” It was also in this pavilion that the funeral service was held for Wooden in 2010.