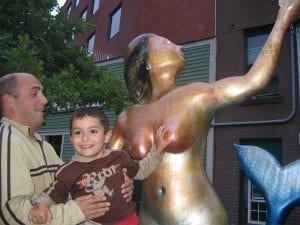 Mermaids are back and debunked for double!

So what’s even bigger than the Puppy Bowl? Mermaids: The New Evidence. This documentary, that premiered on Animal Planet Sunday as a sequel to the highly watched, easily-disregarded Mermaids: The Body Found splashed up 3.6 million viewers and made history by establishing the new network record.

The last mermaid “documentary” (or mermumentary?) was popular as well when it premiered last summer, and ignited a furious internet debate about the existence of mermaids. The National Oceanic and Atmospheric Administration even released a statement to remind people of the non-existence of these mythical marine muses:

“The belief in mermaids may have arisen at the very dawn of our species. Magical female figures first appear in cave paintings in the late Paleolithic (Stone Age) period some 30,000 years ago, when modern humans gained dominion over the land and, presumably, began to sail the seas. Half-human creatures, called chimeras, also abound in mythology—in addition to mermaids, there were wise centaurs, wild satyrs, and frightful minotaurs, to name but a few. But are mermaids real? No evidence of aquatic humanoids has ever been found.”

So there we have the government proof that it’s a hoax—but to add to the false intrigue, the documentaries suggest that there’s a dark, federal cover-up of these bio-aquatic findings, complete with a spin-off webpage that claims seizure by the US Justice and Homeland Security Departments.

Finally, let’s examine the epic impact this has made upon the cable-sphere. Animal Planet has been around for 17 years, and is a network devoted to the natural (not supernatural) world—however, despite the fact that there are about 2 million cataloged species on the globe, mermaids set the record. And actually, the network’s last big bonanza was Dragons: A Fantasy Made Real.

But don’t despair at the current state of culture and tele-education, because this brings up so many new possibilities for great entertainment. To start, how about we eliminate Animal Planet altogether and simply go with Cryptid Planet? (That title comes from “cryptidzoology,” the pseudo-science of studying animals thought to exist that haven’t been scientifically-proven to exist). Get rid of Shark Week for Bigfoot Week and keep the subdued masses from demanding something of substance for their terribly endangered intelligence.

But hang on…first I need to finish the zombie apocalypse shelter.