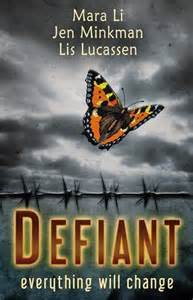 Race, Societies Built by Children, and the Law

Defiant. When the civilization you live in turns out to be a giant, messed-up deception, what do you do? Each of the teens in these three novellas (translated by Jen Minkman) rises up to defy the rigid social order of their worlds.

Meet Emma in The Red Messenger by Mara Li, whose twin sister Sophie recently died in a mysterious accident. She lives in an alternate reality in which the Nazis took over Germany. Think: a world with email, internet, and electricity coexisting with the continued torture of Jews tucked away in concentration camps and ghettos. Emma finds out that there was more to Sophie than she’d previously known…
Meet Leia in The Island by Jen Minkman, a strong-willed teenager who grows up in an isolated island society with rules and traditions based on one pre-apocalyptic book (Star Wars) that preached about the Force.  An aggressive young leader named Saul holds his power over the children using the doctrines of the Force. Leia must uncover the mystery behind that holy book…
Meet Justa in The Tribunal by Lis Lucassen, who lives in a post-World War IV society torn into two classes: Sectorals (the blond and light-colored ruling class) and Stateless (folks with more melanin, apparently). “Segregation is needed to maintain the established order. The Sectorate therefore upholds Inequality in order to prevent future uprisings…One exception only to Sectorial Segregation is acknowledged – before the Tribunal, all are equal.”

My Thoughts & Comments About Each Defiant Novella

The Red Messenger by Mara Li
I had learned about World War II concentration camps while I was in middle school, but I never imagined a dystopian world in which similar racism-induced horrors take place, but with modern and digital technology. This is a great concept, and I think it was well executed overall, with the exception of a few instances of plot-induced stupidity on the part of Emma that were used to push the story forward. The issues of racism and state-enforced athiesm are covered in this book.
As an American, I was surprised at first about how directly this novella tackled the issue of the Jewish concentration camps, but then I realized that the Netherlands were deeply affected by the existence of Jewish death camps during the Second World War. 75% of the Jewish population was deported from the Netherlands to these concentration camps, and many Dutch authorities collaborated with the Nazis to achieve this. This is a painful part of the Netherlands’ history, and I think this novel draws very well from the horrors of that era. The last part of the novella felt like it was straight from the 1940s.
The Island by Jen Minkman
A wall divides the island, and there are rumors of the Other society living in it, called the Fools. When a mysterious guy washes up ashore one day, Leia’s world is totally rocked as she comes to understand the truth behind her society. This is a civilization built by children after an epidemic wiped out most, if not all of the adults in the world. I didn’t like the idea of a society built around a Star Wars book for kiddos, but I liked the novella explores how a society built by children would be like after a few generations.
The Tribunal by Lis Lucassen
This one reads like a good courtroom drama. In light of Trayvon Martin’s death and the 2014 Ferguson unrest in the United States, the theme of a lower-classed person being screwed over by a biased law system (thatpurports to be fair) corresponded strongly with the issues of our time. The Tribunal explores the issues of racism, bias, and corruption in a law-based society which is segregated firmly by color.
Find out more about Defiant, a collection of three novellas by Netherlands authors Mara Li, Jen Minkman, andLis Lucassen:
Goodreads | Amazon
[easy-social-share buttons="facebook,twitter,google,linkedin,stumbleupon,pinterest" counters=0 hide_names="force" fixedwidth="yes" fixedwidth_px="111"]
Previous ArticlePlay your favorite NES, SNES, and Sega Genesis games on one system with the Super Retro TrioNext ArticleCollege Poor No More: 100 Savings Tips for College Students by Michelle Perry Higgins