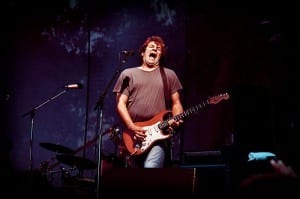 After 25 years, front man of Ween—Aaron Freeman—decided to put his alter ego Gene Ween to rest.

Front man, Freeman, formed Ween with his high school friend, Mickey Melchiondo—also known as Dean Ween—back in the 80s. According to the Guardian in the last 25 years Ween “released 11 studio albums, six live albums, and have collaborated with Yoko Ono, Boredoms and Queens of the Stone Age.”

The break-up was brought about Freeman’s decision to concentrate on a solo career. Freeman told Rolling Stones he has been contemplating the decision to leave the band for eight years. Earlier this month, Freeman released his solo album Marvelous Clouds.

Freeman’s album Marvelous Clouds is his “recovery record” after being in rehab. The album consists of 60s Rod McKuen covers. Freeman states, “It’s important to know that this [work] isn’t a side project…I’m forging new things for myself.”

“I was struck by the simplicity and power of songs…Anybody that can accomplish that kind of thing is great,” remarks Freeman, who came across McKuen through producer Ben Vaughn.

Jokingly, Freeman told Rolling Stone, I could make five more Rod McKuen records, but that could get a little weird.”

As for Ween, Melchiondo and Freeman are on speaking terms. There is no animosity between the two. But, it is still left unclear whether Melchiondo will continue to make music with the current band mates. Freeman told Rolling Stone the band is “pretty much” finished.