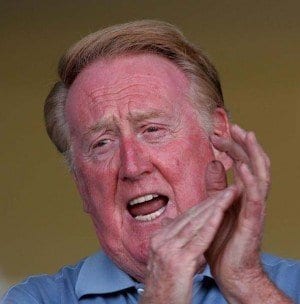 Absence felt by fans and players

The 84-year-old Vin Scully was reportedly suffering from a severe cold and should return to work in a couple days. The Dodgers said he was under doctor’s orders to skip the game.

The legendary announcer’s absence was felt by many. “Just knowing Vin wasn’t in the building was really strange,” said Dodgers Manager Don Mattingly. “I really think it took something away from the afternoon.”

When it was announced before the game that Vin Scully was sick, a giant “Ohhhhhh” rippled through the crowd of 56,000 people. Moments later, when they showed his image on the giant scoreboard, fans recovered to give him a standing ovation.

The Dodgers earned a 2-1 victory over the Pittsburgh Pirates in front of a full house.

Last month Vin Scully announced he would be reducing his regular-season travel, visiting only Phoenix and cities within California.

Vin Scully was inducted into the broadcasting wing of the Baseball Hall of Fame in 1982. The only other time he missed a home opener was in 1977, when he called the first round of the Masters golf tournament for network television.