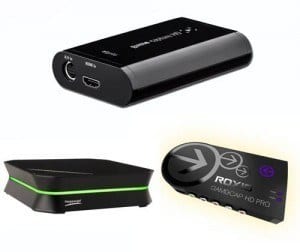 With eSports undergoing the sonic boom of recent and the constant attention given to gaming videos on channels like Youtube, Twitch, and Ustream, it’s no wonder that certain companies have emerged with hardware and software designed to help turn you into an internet sensation. Sadly, not all capture cards are created equally. There are many factors that go into their design and, subsequently, many factors that are then noticed by those purchasing them. With that in mind, how do you know what’s best for you? If you’re only dabbling in gameplay recordings, why spend hundreds of dollars? You may not even enjoy doing it and then you’ve wasted time and money.

Fear not aspiring Gods of Gaming, because College News has taken a look at three very different pieces of hardware that all do the same thing: they make you an internet sensation. They have the potential to, that is. For every successful live-streamer or Youtuber, there are 1,000 floundering and wondering why they aren’t popular. There are a number of factors, of course, but step one is always your capture card. You need high quality, noticeable footage in order to develop a following. With my Xbox 360 in tow, I looked at the Roxio Gamecapture HD Pro, the Hauppauge HD PVR2 Gaming Edition Plus and the Elgato Game Capture HD to determine which is ideal for you.

Setup: A = With both HDMI and component support, the Game Capture HD Pro is ready for action after installation of the included software, a common routine. After software installation and connecting the card to from console to television & PC, users are ready for the Roxio experience.

What’s in the Box: C = In addition to the capture card itself, users will find a USB cable and software DVD. The lack of any connector cable, component or HDMI, is frustrating and creates unnecessary frustration for users. While cables no longer cost an unreasonable amount of money, particularly at sites like NewEgg or Monoprice, it’s frustrating knowing that you’ll have to make another purchase or another stop when you opt to use Roxio as your capture card of choice.

Software: B = The Roxio Game Capture Software includes both capture and editing software, making it versatile and useful to anybody looking to put a unique spin on game videos. The biggest benefit to the software is the simplicity inherent in learning and using it. With tools like Sony Vegas Pro or Adobe After Effects, it can seem daunting when you want to start with your own videos. Thankfully Roxio has created entry level software to ease users into it; that said, Roxio users will not be on the level of those who have learned professional grade software like the titles previously listed. The Roxio software is for beginners and most people watching your videos will probably be able tell.

Ease of Use: A = Install, setup, use. It’s hard to get much simpler than that. The included software adds a nice touch to a package that is otherwise devoid of important necessities. And, on the topic of software, even that’s easy to use, combining streaming, recording, and editing into a streamlined process designed specifically for newcomers.

Setup: B =  The Hauppauge is perhaps the most unique capture card of the three showcased here. Far larger and less discreet than the Roxio & Elgato, this hunk of hardware requires its own DC-in power connection rather than relying on a USB connection to operate. As expected, the HD PVR 2 GE Plus uses HDMI and Component, but also features an audio port for optical-in.

What’s in the Box: A+ = Hauppauge has decided to give users everything they need in one box rather than pack in the bare minimum. Obviously the capture card and aforementioned DC power cable are included, but beyond that are an HDMI cable and component attachment that connects via proprietary attachment. Perhaps most impressive is a Playstation 3 component cable that is included primarily because of Sony’s HDCP, something they use to block recording/streaming via HDMI connections.

Software: B+ = The included StreamEez software makes recording and live-streaming incredibly simple. With Microsoft going the way of Twitch and Sony leaning on Ustream, it’s nice to see Hauppauge seemingly “shaking hands” with both services, particularly because nobody quite knows if one service or another will be more popular. In years past, the Hauppauge lacked the ability to simply and easily stream to services, instead relying on third parties to handle the brunt of it and rendering the Hauppauge hardware as more hindrance than help. For simple recording, Arcsoft’s ShowBiz software handles that task and does it well. For recording in 1080p though, expect to get your frame rate capped at 30fps rather than the ideal 60fps. For professionals, this might be the difference between “purchase” or “pass”.

Ease of Use: B = Having the ability to simply push a button and be live streaming to the world is invaluable, but being forced to use two different pieces of software for your different tasks is obtrusive. The variety of options and extra cables included help justify purchasing the Hauppauge HD PVR 2 Gaming Edition Plus, but one of the more difficult tasks, especially when compared to the other two capture cards here, is finding a place on your entertainment center where it fits comfortably.

Setup: A = No software disk is included, which cuts down on packaging, but to install the required software you’ll have to visit the Elgato homepage and download the installation file. Once you’ve taken care of the software side, the hardware setup is no more difficult or easier than the others. Connect the HDMI or component cables, tether it to your PC, and voila: you’re an immediate internet sensation with millions of people on Youtube staring in awe at your gaming prowess.

What’s in the Box: A- = While there are cables you may find yourself needing if you get deep into recording and decide to expand your library and audience, most of what you’ll need to start with is packed with the Elgato Game Capture, which is covert itself. An HDMI and USB cable are included, as is a PS3 component cable. For the PS3 cable to be useful, Elgato stuffed in a component adaptor, however for those who wish to use component exclusively (which, strangely, some do) you will need your own component cable.

Software: A+ = Despite having to download the software from the site, which can be more of a hassle than one would prefer, the options allowed for livestreaming and game capture are brilliantly simple. By putting all options on one screen, users can capture video for editing or live stream on a whim, seamlessly alternating between the two if that’s your silly desire. Your channel credentials are entered easily,your access to them is painless, and you can be active within minutes.

Ease of Use: B+ = There isn’t a piece of hardware more user-friendly in any of the capture cards listed here; it’s really that simple. When bringing up the Elgato streaming software, you’re greeted with options to input channel logins for Youtube or Twitch, then given additional options for setting up search tags, video titles, game identification, and other important information that your viewers will want to know. Finally, the technical options are also very simple, allowing for volume and microphone adjustments on the fly and recording with or without a delay.

With pros & cons to each capture card, it’s ultimately up to the user (that’s you) to determine what the best fit would be. Each card captures footage in remarkable 720p HD quality, but there are some limitations when looking to maximize your footage at full 1080p video. There are benefits to both amateurs and novices with each of these cards, though the more money you’re willing to spend, the better options you have. With each card, the software is impressive and gets the job done, but even with the simplistic, “pick up and go” options that an inherent in each, users will find third party software to be ideal for editing videos and adding voiceovers. Still, the world of live-streaming has seen enormous growth in these last few years and for anyone who is looking to becoming a part of that community, any of these capture cards would be worth the investment.