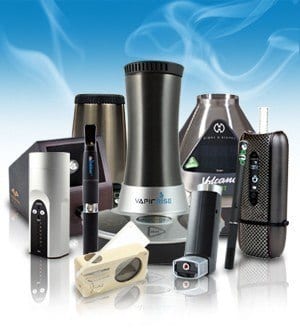 There is a new craze forever changing the landscape of the pot culture – VAPORIZERS.  Vaporizers have been gaining in popularity since the mid 2000’s and have only began to really blossom as an industry .   With recent state legislature being passed that has decriminalized the use of marijuana and made it legal to consume with a doctor’s prescription, the vaporizer culture has been exploding.   This year alone, it is estimated that the vaporizer industry will do over $500 million in sales.

Since the vaporizer industry is still fairly ripe, most people are unfamiliar with what a vaporizer is and how they work.   In the past, vaporizers were only enjoyed by those who were cannabis connoisseurs. But with the recent influx of information regarding the health benefits of vaporization, vaporizers have become increasingly popular to people who are searching for a healthier method of “medicating”.  Quite simply, they provide a healthier and more discreet method of inhalation versus your typical “smoking devices” – bongs, joints, blunts, etc.

But what exactly is a vaporizer? A vaporizer is a device used to release the active ingredients of plant material or to release the therapeutic compounds.  A healthier alternative to smoking, vaporizers heat the material at a much lower temperature (when compared to smoking) so that the active compounds contained in the plant material produce an aromatic vapor (instead of smoke).  Rather than burning the plant material, which can produce numerous harmful by-products, this vapor contains virtually zero particulate matter and significantly reduced noxious gases.  By avoiding combustion (smoke), the user is able to achieve the same desired effects without the harmful side-effects of smoking.

Vaporizing is a healthier alternative to smoking, but it’s also a lot more discreet and easier to use.  There’s no need to light a vaporizer, it does not omit an offensive smoke or smell and it can be easily carried and concealed from one place to another.  Also, your herbs are actually better conserved because they are avoiding the point of combustion.  In short, your herbs will last a longer and you will save more money with vaporizing as opposed to smoking.   Another reason why so many people love vaporizing is that you can taste the full flavor of the herbs.  It’s easier for users to tell the difference between the various strains they’re vaporizing.

The two main categories of vaporizer are desktop and portable.  Desktop vaporizers need to be plugged into a wall (usually used at home), while portable vaporizers are exactly that – portable.  Although many of them are used for herbs, others are compatible with waxy oils and concentrates.   Some of them have temperature control systems, digital displays, forced air/fans that push the vapor out and others utilize a whip or tubing.  Within the portable vaporizer realm, there are the smaller pen style vaporizers which are discreet, and high end portable units maintain a consistent temperature for efficient vaporization.

So where can you find vaporizers to purchase?  You can easily find websites that sell vaporizers, but which one do you choose?  VaporNation.com sells nearly every vaporizer on the market and has a Low Price Guarantee that ensures you’re paying the lowest price around. VaporNation carries just about every popular brand on the market today including Vapir, DaVinci, 7th Floor, Magic Flight, Vapor Brothers, and Volcano.  Not only do they have an amazing selection and outstanding customer service, but they also include free shipping and grinders with every purchase.  They also have a loyalty rewards program which gives 10% back on every order.  Use coupon code COLLEGE at www.vapornation.com to receive 15% off your entire purchase.