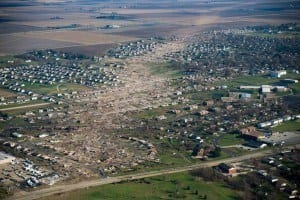 As many as 80 tornadoes raged across the Midwest yesterday, leaving a path of destruction in towns like Washington IL. In the wake of the storm the Illinois Emergency Management Agency has confirmed that there have been six storm-related deaths: three deaths in Massac County, two in Washington County and one death in Washington IL. Along with the single fatality, the storms left 80 Washington IL residents injured.

Washington IL is a town of nearly 15,000 people 140 miles southwest of Chicago. The EF-4 tornado that hit the town had racing winds traveling from 170 to 190 mph. This tornado tore a path an eighth of a mile long from one side of the state to another.

According to Mayor Gary Manier, an estimated 500 homes were destroyed and city streets were torn apart. This destruction caused to the Illinois National Guard to send in a 10-person search and rescue team to help.

From 6 p.m. Sunday to 7 a.m. this morning a curfew was enforced in Washington IL. Those wishing to enter the city limits had to prove that they had lived in the town at several checkpoints. Other entrances to the town were blocked due to the severe damage.

Many residents tell stories of their homes and neighborhoods being ripped apart in an instant. Michael Perdun recounted how he huddled his family in his basement until the storm passed:

“The whole neighborhood’s gone. The wall of my fireplace is all that is left of my house…I stepped outside and I heard it coming. My daughter was already in the basement, so I ran downstairs and grabbed her, crouched in the laundry room and all of a sudden I could see daylight up the stairway and my house was gone.”

Along with the National Guard, the White House released a statement detailing that President Obama was briefed on the storms in Washington IL and through the Midwest and had been communicating with federal, state and local officials.

“Everybody’s without power, but some people are without everything,” Mayor Manier told the Associated Press. “How people survived is beyond me.”

According to ComEd, roughly 19,000 customers in the Illinois area are still without power as a result of the storm. Around 1,300 of those customers are in Chicago, 1,000 in the northern region, 5,400 in the west region and 11,200 in towns like Washington IL in the southern region.

The Chicago Tribune reported that according to the Chicago Weather Center, there have been 194 tornado warnings in the month of November in Illinois since 1986. Of these, more than half of them were issued during yesterday’s numerous storms.

Previous ArticleMad Catz Strike 3 Keyboard Wont Replace Your Significant Other … or Will It?Next ArticleGeorge Zimmerman is in custody for felony aggravated assault