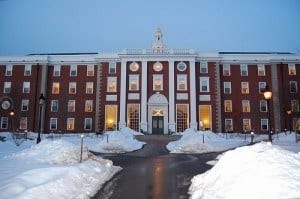 Three buildings at Harvard University have been evacuated after an e-mail received at the university this morning warned that explosives have been placed inside of four buildings on the campus. This comes during week of final exams for the Harvard undergraduate students.

Students were alerted by text messages at around 9 a.m. that advised everyone in the four effected buildings to evacuate the premises immediately.

After thorough investigation and no explosions reported or explosives found, law enforcement officials said that the threat seemed to be a hoax. On Harvard’s emergency website they said “ Out of an abundance of caution, the buildings have been evacuated while the report is being investigated. Harvard’s focus is on the safety of our students, faculty and staff.”

Harvard University then proceeded to evacuate three buildings, which were the Harvard Science Center, Sever Hall, Emerson Hall and a freshmen hall. Some of the week’s final exams that were held in some of these buildings were delayed or canceled. College officials say that they are working to reschedule the canceled exams.

At around 11 a.m., Cambridge Police notified the public saying that they reopened the roads around Harvard Square, which had been closed due to the threats.

Then at 1:48 EST, the website said “Sever Hall and Harvard Yard are cleared and students may return. Science Center still closed.”

No other updates have been reported.