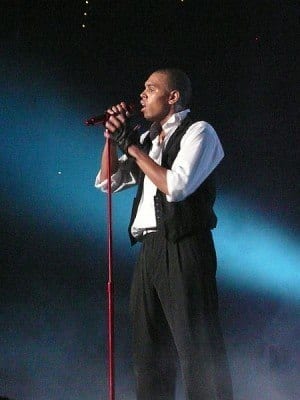 Chris Brown and Rihanna have reunited for not one, but two songs.

Chris Brown took a lot of heat earlier this month after he performed twice at the Grammy Awards, and took home the award for best R&B Album. Chris Brown had not appeared at the Grammys since he assaulted his then-girlfriend Rihanna the evening before the awards show three years ago.

Since his performances at the Grammy Awards, Chris Brown fans and critics have been voicing opinions. Most notably, country musician Miranda Lambert tweeted the morning after the Grammys, “Chris Brown twice? I don’t get it. He beat on a girl… Not cool that we act like that didn’t happen.”

Miranda Lambert fired at Chris Brown again last week when she held up a sign that said, “Take notes Chris Brown,” before singing her domestic violence song “Gunpowder and Lead” in which a woman prepares to confront her abusive husband with a shotgun.

Miranda Lambert was not the only star speaking out about Chris Brown. Jack Osborne and Michelle Branch also tweeted their dissatisfaction with the Grammy’s decision to allow Chris Brown to perform.

Meanwhile, social media feeds surged with tweets, posts and status updates from Chris Brown fans, mostly young girls, saying things like, “I’d let Chris Brown beat me any day,” and, “Chris Brown could beat me all he wants, he is flawless.”

Despite the fact that many former fans are unable to forgive Chris Brown, Rihanna appears to be giving him a second chance, at least as a friend and fellow artist.

A week of rumors about a musical reconciliation between Rihanna and Chris Brown culminated with the simultaneous release of two songs featuring both of the artists. Chris Brown appears on the remix of Rihanna’s sexually charged song “Birthday Cake,” and Rihanna lends her voice to a remix of Chris’ new song “Turn Up the Music.”

While Rihanna appears to have forgiven Chris Brown, their reps have repeatedly said that they are not currently getting back together romantically.