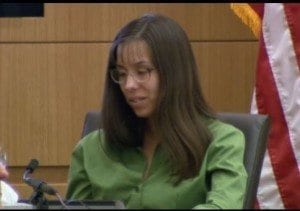 Jodi Arias enters the final sentencing phase of her trial

Jodi Arias was declared eligible for the death penalty on Wednesday. Arias will soon learn what her final fate will be.

Jurors took less than three hours on Wednesday to decide that Arias’ murder of Travis Alexander could warrant the death penalty. In order to be eligible for the death penalty, a crime has to be considered especially violent and heinous.

The jurors’ decision was unsurprising, based on details that have been released about the crime.

Jodi Arias was convicted of killing her former lover, Travis Alexander, last week. Alexander had been stabbed nearly thirty times before having his throat slashed and being shot in the head. The prosecution pointed to this extreme overkill as the reason that Arias should be eligible for the death penalty.

“The last thing [Alexander] saw before he lapsed into unconsciousness … was that blade coming to his throat,” said prosecutor Juan Martinez. “And the last thing he felt before he left this earth was pain.”

Martinez again graphically described the crime to jurors, and ended with a full two minutes of silence to represent exactly how long it took Alexander to die.

Arias’ attorneys didn’t offer much opposition to the prosecution. They made brief opening and closing statements, and offered no witnesses. They claimed that Alexander wouldn’t have felt much pain due to the amount of adrenaline running through his body.

Arias spent last weekend on suicide watch after expressing her preference for the death penalty in an interview with Fox affiliate KSAZ.

“Longevity runs in my family, and I don’t want to spend the rest of my natural life in one place,” she said. “I believe death is the ultimate freedom, and I’d rather have my freedom as soon as I can get it.”

Arias initially denied any involvement in Alexander’s death. She later changed her story to two masked intruders committing the murder. Her final defense rested on the claim that Arias killed him in self-defense.

The sentencing phase of Arias’ trial begins today. And two years after Alexander’s death, his family will finally have closure.