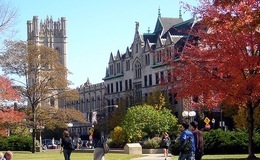 There’s a new Facebook in town. This time it’s not for making friends, or for dating, but simply for “hooking up.”

The University of Chicago’s Eduhookups.com, is quickly becoming the online college network to turn to when searching for casual sex partners, reports the Daily Mail.

Formerly a website targeted only to the University of Chicago, UChicagoHookups.com, the website acquired a new domain and has expanded to two other Chicago-area universities, Northwestern University and Columbia College Chicago, as of Monday. But it’s not just in Illinois. The website will also be available for Brown University students as of April 4.

In the past month, according to the source, the site has received 815,000 hits. Today it has 800 registered members, mostly male, and nearly 2000 private messages have been sent by members since the service was launched.

Not everyone agrees with the service of the website, or the message it offers. That message is pretty clear, as the heading on the website states, “Chastity is curable if detected early.”

However, supporters claim that the service not only provides a venue for those interested in no-strings-attached relationships, but it also revitalizes the image of the University of Chicago from an old, overly-serious campus community.

Eduhookups.com “was originally intended as a coding project and learning experience by a small team of University of Chicago undergraduates, to change the age-old belief that UChicago is a place where ‘fun comes to die’ and ‘the squirrels are cuter than the girls and more aggressive than the guys,'” a statement on the website states.

On a humorous note, according to the Chicago Tribune, Jay Leno spoofed Eduhookups.com on “The Tonight Show with Jay Leno,” stating:

“We already have a place where college students can hook up for casual sex,” Leno said. “It’s called college!”