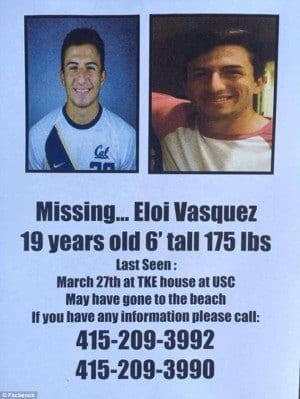 Vasquez left the party at the University of Southern California frat party, hosted by Tau Kappa Epsilon at approximately 1:30 a.m. after telling friends there that he wanted to go for a walk. Friends tried to persuade him to come back to the party, but Vasquez said that he was going to the beach. He never came back, and no one has been able to contact him since. His last communication was to his friend, Aurora Cardenas, at around 2:15 a.m., and he told her that he was lost, and that he was “screwed”.

Police officials say that Vasquez left without any identification or money on his person, but that he did have his cellphone. Vasquez called his friend, told her he was in trouble, and that he needed her to come get him. He tried to call again but the phone “clicked” when Cardenas answered. She said that she wasn’t sure if it had ran out of battery or if he had hung up. Upon telling his friends that he was going to the beach, it is not certain whether he knew that the nearest beach was over 15 miles away.

His parents, friends, and officials have been searching the area, to include Santa Monica and Venice Beaches. Vasquez is described as 6’ tall, 175 lbs., and of Hispanic ethnicity. He was last seen wearing a white and red shirt, grey chinos, and white plimsolls. Cal Athletics stated on their site that “Our entire Cal Athletics family is very concerned for Eloi’s safety and our first priority is to help in any way we can to locate him.”