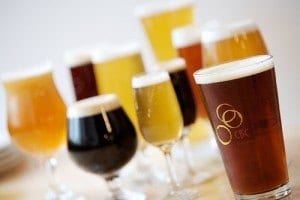 For years, Americans have been getting too many empty calories from soda. But according to a government study, adults get almost as many calories from alcohol as they do from soft drinks. It’s been found that 6 percent of the calories adults consume, on average, come from soda and other sweetened drinks. Alcoholic beverages are a close second, accounting for 5 percent.

In the study, more than 11,000 adults from 2007 to 2010 were asked questions regarding what they ate and drank over the past 24 hours. According to the results of the study, about one-third of men and one-fifth of women consumed calories from beer, wine or liquor.

When comparing alcohol to soda, a 12-ounce regular can of Coca-Cola contains 140 calories—slightly less than a same-sized can of regular Budweiser. A 5-ounce glass of wine has around 100 calories.

According to Margo Wootan, director of nutrition policy for the Center for Science in the Public Interest, a public health advocacy group, “Health officials should think about enacting policies to limit alcohol intake, but New York’s focus on sodas is appropriate.”

She went on to say, “Let’s see how it goes and then think about next steps.”