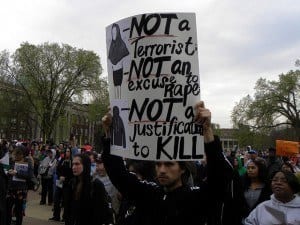 Juror goes on Anderson Cooper to talk about trial

Juror B37 has been creating quite a stir in the wake of the George Zimmerman verdict. So far she is the only juror to speak out about the verdict. And boy does she have a lot to say.

The female juror started with an interview on CNN’s “Anderson Cooper’s 360.” Truthfully, it was a bold thing to do with backlash from the verdict still a major concern. She seemed to want to explain the jury’s decision.

“I think George Zimmerman is a man whose heart was in the right place,” said Juror B37. “But just got displaced by the vandalism in the neighborhoods, and wanting to catch these people so badly that he went above and beyond what he really should have done.”

It was clear that Juror B37 and the other jurors agonized over the decision. She said that the vote was originally split. Three wanted guilty, three wanted not guilty, and the rest wanted to do something to give Trayvon Martin’s family some comfort. They just couldn’t figure out how to do it.

This case garnered national attention, and has quickly escalated to a debate on race. Many believe that Zimmerman killed Martin because he was black. And now they believe his killer is going free because he’s white.

Juror B37 was adamant that race played no part in the jury’s deliberations.

“Anybody would think anybody walking down the road, stopping and turning and looking — if that’s exactly what happened — is suspicious,” Juror B37 said. “I think all of us thought race did not play a role. We never had that discussion.”

Juror B37 also announced her decision to drop plans to write a book on the Zimmerman trial. Literary agent, Sharlene Martin, released news of the book before the Anderson Cooper interview aired. Only hours later, Juror B37 backed out.

“I realize it was necessary for our jury to be sequestered in order to (protect) our verdict from unfair outside influence, but that isolation shielded me from the depth of pain that exists among the general public over every aspect of this case,” she said.

The Zimmerman trial isn’t going away any time soon. For Juror B37, it’s probably the best decision to distance herself from the case. But hopefully, her speaking out will help calm tensions.