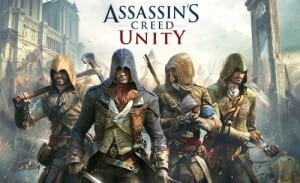 By this point you may have heard about Assassin’s Creed Unity and how it released with some “technical issues,” to phrase it gently. The truth is, putting aside the problems with how it runs, it’s a tale of two games. The first features the wall-running, customization, and combat that we’ve loved for so long. The second is a larger look, which takes the Assassin’s franchise itself and leaves players questioning just what on earth Ubisoft is doing.

Set in the France in the late 1700’s, tension is high between the lower class and the upper class, ironically reminiscent of today’s society. You play as Arno Dorian, an upper class aristocrat whose father was well connected into the French social world, but like all characters in the Assassin’s Creed series, you’ve a penchant for mischief.

Arno’s aptitude for doing things he shouldn’t is showcased during the game’s tutorial, when you’re introduced to Arno as a young boy. Asked to “stay put” while his father runs an errand at the mansion you’re visiting, Arno disobeys and heads off to explore. Here’s where you get the first taste of some of Unity’s stealth changes, which implement the “Last Known Position” system popular from Splinter Cell Blacklist.  You’re also introduced to Elise, the eventual love interest of Arno, and while walking players through the tutorial, Ubisoft does a great job of making you grow fond of Elise, despite the focus being on control rather than interaction.

Following the rhetoric of previous Assassin’s Creed games, tragedy befalls Arno on multiple instances, forcing him to discover that he’s been woven into a war of Templars and Assassins that he never knew existed. He’s then recruited and works toward climbing his way to the top of the Assassin’s hierarchy, with the idea of revenge fueling his ascent. If all of this is sounding familiar, there’s good reason why. The voyage of Assassin’s Creed overall seems to take the same road time and time again.

“Man has special talent for parkour and weird “powers” that help him see what others can’t (including targets). Man is recruited into the Order of Assassins. Man begins climbing the ranks, fighting Templars along the way, only to discover that the Order itself is in danger. Man saves the world.”

Sure, there’s sizzle added to each game to make it feel slightly different, and that’s true for Unity as well, but fans of the series are starting to question where it’s heading. After initially playing as Desmond Miles and venturing into the Animus to relive some of his ancestor’s experiences in order to find the magical “Pieces of Eden,” we’ve seen the games move away from that. Last year, during Black Flag, you played a new employee at Abstergo, the modern day Templar-run company which is still searching for the Pieces of Eden under the guise of a gaming company.

The Black Flag story arc taking place outside of the pirates was interesting and seemed to start putting us back on the path of understanding what, exactly, was driving the Templars and Assassins to search for these mysterious objects. In Assassin’s Creed Unity though, all interactions outside of the Animus are cut scenes. In fact, you only see one person, codenamed “Bishop,” though you hear another voice that helps Bishop give you some direction toward what you should be doing with Arno.

In Arno’s world you’re provided dozens of customizations for him. Your arsenal of weapons falls into multiple categories, each with their own expansive list of options that highlight your particular play style whether it’s stealth or direct combat. If you prefer to be a quiet, methodical killer, “your Arno” will look different than someone who likes to run in with a two-handed weapon and lay waste to enemies, while taking a few hits in the process.

Your outfits mimic your style as well, affording more armor for less stealth and vice versa. It’s important to note that because of the implementation of co-op, a surprisingly fun addition to this year’s release. Two to four players can embark on missions that reward the team for teamwork and for completing goals together. The player skill system, which lets you upgrade Arno throughout the game to learn new, dangerous abilities, also carries over to co-op and affords each team member a “shared ability”. You can heal your fellow assassins, or you can share your “eagle vision” with them, allowing them to see enemies and hiding spots having to use their own skill, which now triggers a cooldown.

Stealth seems to be the key in co-op though, and players that rely on the “run in, stab everyone” approach will be looking for new co-op partners rather quickly. Instead, if you can work together to approach your enemies and whittle them down, one by one, you’ll earn enormous rewards after completing your primary objectives.

It’d be unfair to talk about how immense the customization is, how fun the co-op is, and how beautifully Ubisoft has captured Paris without pointing out Unity’s flaws though. Technically speaking, the game is a mess. Frame rate drops dramatically even when you’re doing nothing but standing still. The crowds, featuring pissed off frenchmen, armed guards, and a third faction of troublemakers, will often times fall through the ground or get stuck on invisible objects, a fate that even befalls Arno from time to time. While not witnessed on Xbox One, the PC and PS4 releases have run into issues where character faces won’t load, leaving just phantom eyes and teeth to carry on conversations with.

Because of the technical issues and the questions that loom over the franchise as a whole, maybe fans should just throw up their hands and declare that Assassin’s Creed Unity never happened.

That’s a bit of hyperbole, yes, because there are indeed worse games available. Because of the polish and evolution of previous titles in the franchise though, I expected more from Unity. Ubisoft clearly has worked on implementing larger crowds, better character locomotion, enjoyable co-op play, and deeper customization than ever before. Unfortunately the execution of was lacking. I have no doubt that for the next Assassin’s Creed title (which may be in Egypt according to hints dropped in Unity) will be far better than the product that was put out this year.

But if not, I think the Assassins are in more danger than we realize.