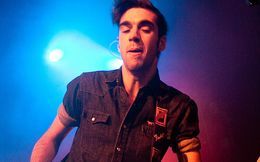 With their latest album, Two Door Cinema Club are making a name for themselves

Composed of school friends, guitarist/singer Alex Trimble and Sam Halliday along with bassist/singer Kevin Baird, Two Door Cinema Club have already headlined their own shows around the world and embarked on tours with notorious acts like Phoenix and Tokyo Police Club.

Signed to Glassnote in 2009 alongside other indie favorites Phoenix and Mumford & Sons, TDCC are breaking artists with just the right mixture of contemporary indie/electro/pop/rock and truly inspired originality. TDCC’s first and only full length,”Tourist History”, was produced by Elliott James (Bloc Party) and is an explosive mix of danceable and unabashedly pop tracks.

The greatest aspect of “Tourist History” is that it is never dull – even on tracks that start off slow, like ‘Eat That Up, It’s Good for You,” can quickly verve into an unexpectedly energetic and synth-infected direction. The album has already drawn attention from Nylon Magazine as 2010’s best album and is listed among the nominations of Ireland’s 2011 Choice Music Awards for Album of the Year since its recent release in April of 2010, a few accomplishments that will certainly expand throughout 2011.

For Fans of: Tokyo Police Club, Miike Snow.
Listen to: “Something Good Can Work,” “Cigarettes In the Theatre”