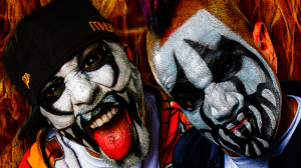 Twiztid’s “Boogieman” video marks many firsts for the band, formed in 1997. This video is the first to be released from their album “The Darkness”, their first studio album from their new label Majik Ninja Entertainment. “Boogieman” was the first single released from the album recording in their studio “The Dojo” in Michigan. The Darkness debuted in January on Billboard’s Top 200 at Number 29, marking the band’s 11th album to debut on the charts.

The video premiered on March 17th on the band’s website twiztid-shop.com, reflecting more of a Halloween theme as opposed to the Irish holiday it was released on. A cross between a night at Fright Fest and an internet date gone horribly wrong, it’s worth the five-minutes if you’re a fan of horror films.The actresses opening the video are particularly gifted at delivering their lines, but they do have pretty faces and huge boobs. The video, filmed at the California Institute of Abnormalarts in North Hollywood, CA features horror legends Reggie Bannister, from the “Phantasm” films, and Tyler Mane of the “Halloween” remakes and 2000’s “X-Men”.

While the only repeat viewers may be hardcore fans of the horrorcore duo, it’s definitely worth a watch for the scary movie buffs and absolutely deserves to be added to your halloween video playlist.

You can watch the video here.