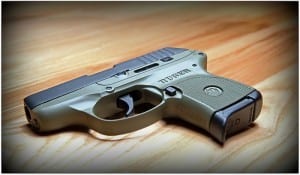 Woman forgets about loaded gun in her purse, gets it past TSA

A loaded gun got past TSA this week when a woman forgot about the .38-caliber Ruger handgun she had stashed in her purse. The woman, a 37-year-old firefighter from Orlando, was already in the air on her flight from Orlando to Newark when she remembered that the gun was still in her purse. She told a Port Authority officer about the loaded gun when she landed in Newark, and the pistol was confiscated.

“TSA is aware of this situation and is reviewing the circumstances,” said TSA spokeswoman Lisa Farbstein when asked about the incident. TSA has yet to give a better explanation for how the gun got past the screening process.

This isn’t the only time a weapon has made it past TSA. It’s not even the only time this week. The day after the Ruger incident, New Orleans Hornets Vice President Joshua Richardson left a loaded gun in his luggage and made it past the TSA security checkpoint. While reports remain unclear on whether the gun was in Richardson’s carry-on or checked baggage, it doesn’t matter — TSA rules dictate that even checked weapons be unloaded. Richardson made it from New Orleans to Newark with the weapon and was finally stopped when he tried to fly back to New Orleans with the loaded gun still in his bag.

A TSA spokesman told ABC that almost 2 million people go through TSA security checkpoints every day and that four weapons are found, on average, per day. This year, that adds up to almost 1,100 attempts to carry weapons that are “thwarted by TSA officers.”

However, this week’s instances of TSA letting loaded guns onto planes have sparked concern about the effectiveness of the agency’s screening process. The Ruger .380 might be an easily concealed gun, but TSA is supposed to catch even the stealthiest of gun carriers. What do you think? Do the recent incidents worry you or diminish your trust in TSA?