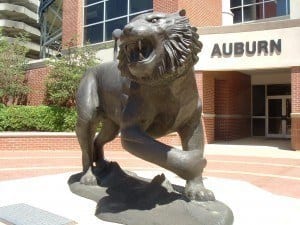 “This is a sad, sad day for everyone associated with the entire Auburn family,” Tigers coach, Gene Chizik, said.  “I am devastated by the passing of three young men, including two that I personally knew in Ed Christian and Ladarious Phillips, and my heart goes out to their families.”

Auburn University mourns the deaths of Ladarious Phillips of Roanoke, Ala, Ed Christian of Valdosta, Ga, and Demario Pitts of Opelika, Ala. as these young men’s lives were taken at the ages of 20 on June 9, 2012.  Last season, Phillips was a fullback for the Auburn University Tigers, and Christian supported on the sidelines due to a back injury.  At a pool party near Auburn University, Desmonte Leonard opened fire due to a fight between several men over a woman, authorities and witnesses stated.

Of the three wounded, Eric Mack, is a current player of the Auburn University Tigers and was taken to East Alabama Medical Center for treatment of gunshot wounds.  The junior offensive lineman is expected to make a full recovery by this coming up season.  The other two victims, Xavier Moss and John Robertson, were also both hospitalized; however, Moss was released.  Robertson was shot in the head and is in critical condition.

Investigators are still searching for the gunman, whom fled the scene in a vehicle with two other people.  Auburn Police Chief, Tommy Dawson, emphasized that the boys killed and injured were not connected to the shooter when he stated, “The only connection that the Auburn football team has to this is they’re the victims of a brutal shooting,” Dawson stated.  “Sometimes the young men get a bad rap, I feel like, but they are the victims today.”

Turquorius Vines stated that he was at the pool party with his friend, Pitts, that Saturday evening.  He and Pitts were approached by two other men whom began fighting with them over a woman.  Vines said that he punched one of the men, and Pitts hit both of them over the head with a bottle.  Neither of them had ever met the shooter.

When discussing the loss of his close friend, Vines said, “It’s like I lost a lung. I don’t know how I’m going to survive this.”

Auburn police, the Federal Bureau of Investigation and the U.S. Marshal’s Service are out searching for Leonard, whom is wanted on three warrants for capital punishment.