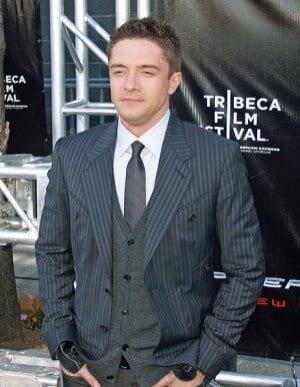 TV and film actor tries his hand at theatre

Topher Grace has decided to take on the theatre after success with TV and film.

Most well-known for his role as the witty Eric Foreman in the Fox sitcom That ‘70s Show, Topher Grace has enjoyed the variety of roles he’s taken on. “I love it all,” said Grace in a recent interview. “I love playing good guys. I love playing bad guys. I love theatre. I love film. I love watching TV. I want a passport to everywhere. I don’t want to be exclusive to one thing. That is a huge problem for my agents because I think I would make more money if I focused on one specific type of character or genre… but especially while I’m young and single I really want to explore everything.”

He is currently playing the lead in the off Broadway play Lonely, I’m Not, now playing at Second Stage Theatre. Topher Grace plays Porter, a guy who’s recently divorced, lost his job and had a nervous breakdown. Things take a turn for the better when he falls in love with a blind businesswoman played by Olivia Thirlby. The play was written by Paul Weitz.

Although this is the first professional play Topher Grace has been in, he was actually discovered in a boarding school production of A Funny Thing Happened on the Way to the Forum. The parents of a classmate, Bonnie and Terry Turner, ended up creating That ‘70s Show. “I promise you, I was not that good in the musical,” he said. “I still don’t know what the producers saw in me.”

Another contributing factor to his success onstage may be his experience filming in front of a live audience for seven seasons of That ‘70s Show. “It’s great to get back in front of an audience and hear that reaction or more importantly what they don’t react to. There’s nothing louder than 300 people not laughing,” said the 33-year-old actor.

Other recent projects of Topher Grace include the Indie film The Giant Mechanical Man, where he plays a deluded motivational speaker. The film also stars Jenna Fischer of The Office and was directed by Fischer’s husband Lee Kirk. His next film, The Wedding is slated to be released in January and also stars Amanda Seyfried, Robert DeNiro, Katherine Heigl, Robin Williams, Diane Keaton and Susan Sarandon.