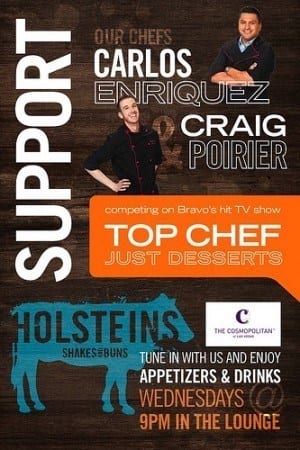 The season finale of “Top Chef: Just Desserts” aired Wednesday night, and when all was said and done, Chris was declared the winner.

For the finale, the “Top Chef: Just Desserts” finalists were given the challenge of creating a showpiece featuring an entremet, a savory bread, a bonbon and a plated dessert, all of which were to be inspired by a special person in their lives. Sally drew inspiration from her mother and sister, while Chris and Matthew dedicated theirs to their wives and children.

The finalists randomly chose two of the eliminated contestants to aid them in the final endeavor. Sally chose Orlando, whom she had constuct her showpiece. This decision drew some criticism from Chris, who emphasized that he had created his chocolate showpiece all by himself…even if it did begin to fall apart towards the end of the night. Matthew emphasized that all of the techniques he tried were outside of his comfort zone. The judges were impressed with the contestants, but Chris impressed them the most. He took home the “Top Chef: Just Desserts” grand prize of $100,000 from KitchenAid, a feature in Food & Wine magazine and a showcase at the Annual Food & Wine Cayman Cookout.

Chris gained attention throughout the competition with his impressive chocolate work and his desire to win the prize in order to pay for his daughter’s heart surgery.

You can watch video from the “Top Chef: Just Desserts” finale here.