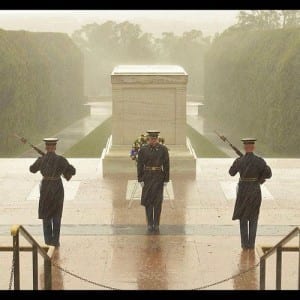 Tomb of the Unknown Soldier guards have stood resilient in the face of what is now a state of emergency on the East Coast. Although cities are being called to evacuate in the impending presence of Hurricane Sandy, a few have stood up to the superstorm’s forces.

The Tomb of the Unknown Soldier in Arlington, Va. has its guards standing strong and offering inspiration in a time of uncertainty for many in the U.S. Soliders of the 3rd Infantry Regiment continue to stand despite weather conditions.

“MT @missioncontinue Incredible – Unfazed by #Sandy, soldiers stand guard at the Tomb of the Unknowns bit.ly/S8zZIS,” the tweet read.

The Old Guard has guarded the Tomb of the Unknown Soldier 24 hours a day, 365 days a year since April 6, 1948. The tomb is the grave of an unidentified soldier, and the site remains to commemorate unknown soldiers from World Wars I and II, the Korean Conflict and the Vietnam War.