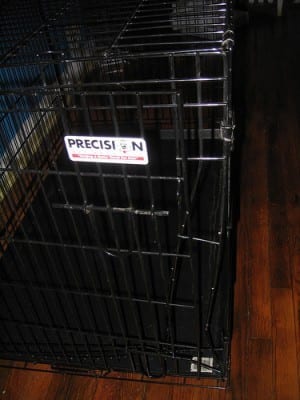 An Oklahoma man was arrested after police found his 18-month-old daughter locked inside a metal dog cage. The dad was found passed out due to either drugs or alcohol. Police were called after a neighbor found the oldest daughter naked outside the family’s home and received no responses after knocking on the door.

Police officers also received no response, but spotted a small child in a dog cage after they looked inside. It was then that they forced their way inside and found the toddler covered in feces as well as a 3-year-old asleep in another room. According to Tulsa police spokesman, Leland Ashley, “Their father was found asleep on a bed in an alcohol-or narcotics-induced stupor.”

All three children were placed into the custody of the Department of Human Services. As for their father, he was arrested on a child neglect complaint. All children showed no signs of physical injury. The mother of the children had been at work during the incident and arrived just as officers were about to leave the scene. She was not arrested.

Ashley went on to say, “A citizen was concerned, he heard a small child crying outside for about 20 minutes. He went outside to investigate and found the 4-year-old child. You have to give credit to that neighbor who acted and did not ignore the situation.”

The Oklahoma man is being held at $50,000 bond at the Tulsa County jail. He is set to appear in court on November 19.

A man by the same name and same date of birth was given a suspended sentence back in August after pleading guilty to possession of a precursor to manufacture methamphetamine.

No word yet on when his father-of-the-year award will arrive.