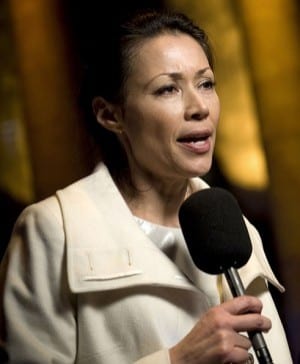 Boisterous colors are frowned upon at NBC. So is gray hair. Ann Curry was fired from The Today Show after 15 years of serving on its team of anchors.

According to Mediaite.com, Ann Curry said that she was approached by a viewer on The Today Show, who asked her if she was trying to look like Toucan Sam.

But Curry’s main goal is to brighten the moods of the Americans.

Ann Curry is known for her colorful spectrum of clothing, having appeared in a dress with large multi-colored flowers, as well as in a blue trench coat paired with traffic light green Hunter boots on the show.

And on another count, the 55-year-old Today anchor refused to dye her hair, which was graying, according to the network’s producers.

Curry took the rejection personally. Ann Curry was offended enough to reflect into – not just the professional – the personal lives of all women.

‘We constantly punish ourselves with degrading thoughts when we look at ourselves in the mirror,” Curry said, explaining the exterior influences on a woman’s self-esteem.

Curry added, “The one thing we deserve is a better relationship with ourselves. We waste too much time beating ourselves up. I think at my age of 55, it’s time to stop doing that.”

Ann Curry is more concerned with celebrating and respecting her family’s genes than to dye her gray hair. But that does not mean does not take care of her body or her image.

“Of course I want to look my best. I eat right, exercise and use skin cream.”

But Ann Curry’s image was not the only possible factor in losing her job. According to MailOnline, Curry was an annoyance to co-anchor Matt Lauer, and the two failed to establish an on-air chemistry.

Curry is set to return to foreign reporting, and mentioned an aspiration to teach. She wished to live her father’s dream, family legacy being a common theme in Ann Curry’s career.

Ann Curry’s dismissal had her doubting her own value to the country.

“I know NBC pays my salary but I have never doubted who I work for. I think about the people who watch,” Curry said, adding, “They’re the ones who matter to me. I want to feel I haven’t dropped the ball when it comes to them.”