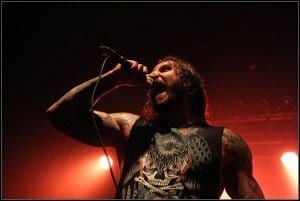 Tim Lambesis is best known as the lead singer for As I Lay Dying, a heavy metal band that was nominated for a Grammy in 2007. On Tuesday, the singer may have created a different legacy for himself.

Police arrested Lambesis for allegedly trying to hire someone to kill his estranged wife. The couple had filed divorce papers last year, and, up until now, the split appeared amiable.

The change may have come when Meggan Lambesis expressed concern over Tim Lambesis’ ability to adequately care for their three children. She claims to have noticed her estranged husband being distracted by texts and phone calls, and even falling asleep while the kids played at the beach. Their children – ages 4, 8 and 10 – were all adopted from Ethiopia.

While Meggan Lambesis never expressed fear for her safety, there may have been warning signs in As I Lay Dying’s latest album. The band’s website describes the album as “far darker, more pessimistic.”  Lambesis claims it wasn’t intentional.

“On this record, I wasn’t purposefully trying to be negative, but I think sometimes we have to be honest with some of the darker and more difficult times of our lives to get back to that positivity,” the singer said. “While the lyrics do perhaps seem like a dark window into my soul, they’re written that way specifically because I want to move on and transcend those difficult moments in life.”

The arrest occurred after police received an anonymous tip.

“The information came to us late last week. We acted quickly on it. I believe that we averted a great tragedy,” a police spokesperson said in a statement.

Neither the singer’s family, nor his attorney has commented on the arrest.

The band’s record label, Metal Blade, released a statement to fans because of the band’s tour that is scheduled for this summer.

We’ll keep you informed as best we can,” the message said. “Our thoughts right now are with Tim, his family, and with everyone else affected by this terrible situation — and with our fans, whom we love and draw strength from.”

The band is often classified as Christian, but Lambesis has always wanted people to look past that label.

“Of course religion has some influence on the things that we write about, just like all of our life experiences do, but as a band, we want to be judged on the music rather than what our personal beliefs are,” he said.

Lambesis was scheduled to be arraigned today in Vista, Cal.