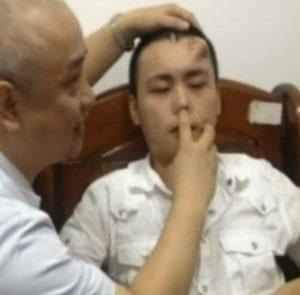 Yes, on his forehead

The man, named Xiaolian, has received a surgical attachment of new skin tissue on his forehead, per doctor’s requests. This is not a medical horror story, however.

Xiaolian began suffering from a severe nose infection after a traffic accident. His original nose was left deformed after the infection corroded away the cartilage. Doctors were unable to fix this problem despite their best efforts.

The only other option available for Xiaolian was to undergo a surgical transplant of a new nose. Doctors placed an expander under the skin tissue in his forehead. Once the skin stretched out, doctors took cartilage from his ribs and implanted it into his forehead. They then molded the skin into the shape of a nose.

The new nose is completely his own. The nose will continue to grow until it is ready to be transplanted to the center of his face. His deformed nose will be removed, while the new one takes its place.

Local media reports that the surgery could occur soon.