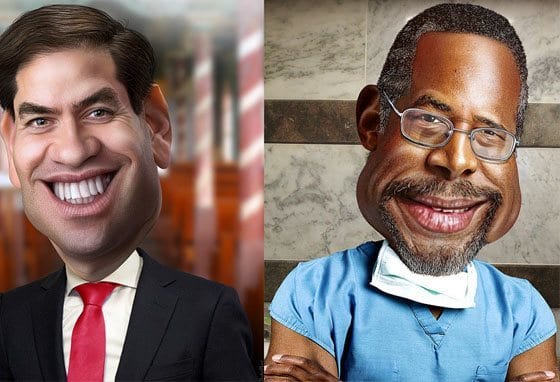 Where do the presidential candidates stand in the polls?

Nearly a week after the third round of the Republican presidential debate and the first polls indicate that Ben Carson and Donald Trump remain the two front-runners in the third round republican debate recap. Ted Cruz is in third place after his performance at the debate. Cruz took much of the spotlight during the Republican presidential debate setting the theme for the night by taking on the moderators. His responses were thought-out and prepared when he expressed his disapproval for the liberal media. “The questions that have been asked so far in this debate illustrate why the American people don’t trust the media,” Cruz said. During the Republican presidential debate, Cruz took the opportunity to slam liberals and the mainstream media. His performance elevated his spot in the polls as Cruz proved to be an effective debater.

As the polls in the Republican Party shift, the Democrats prepare for the second round of their debate. So far, the battle between Hillary Clinton and Bernie Sanders has continued with few tensions but Sanders has clearly set himself apart. According to polls, with no surprise, Clinton is far ahead of all the Republican and Democratic presidential candidates. However, one candidate’s conservatism has drawn a lot of media attention after his past debate performances and is proving to be on the raise.

You will also read: Paul Ryan takes the position as house speaker

Marco Rubio delivered a strong performance during the Republican presidential debate, tripling his standings in a New Hampshire poll. He is the favorite of 13 percent of likely primary voters in the state. During the debate, the senator from Florida swiftly answered questions regarding his voting absences in the Senate, deflecting attacks from Jeb Bush by focusing on the issues. “The only reason why you’re doing it now is because we’re running for the same position, and someone has convinced you that attacking me is going to help you,” Rubio said.

Another moment in the debate that may reflect his raising poll numbers is when Rubio was also confronted with a few character questions. Again, he diverged, “This debate needs to be about the men and women across this country who are struggling on a daily basis to provide for their families a better future that we always said this country is about.” Rubio went on to discuss policies pertaining to his platform while painting an elaborate picture of his own story of success. Rubio confidently answered questions about his personal finances, the economy and immigration, sealing his first Republican presidential debate victory.

The retired neurosurgeon Ben Carson took the lead in the polls despite his controversial comments in the weeks prior to the Republican presidential debate. He did not say much during the debate and ignored criticism about his lack of political insight, keeping to his charismatic and calm demeanor. Both Carson and Trump took criticism for their offensive statements geared toward Muslims. Carson said that, “The U.S. shouldn’t elect a Muslim president” and attacked the LGBT community when he said that prisons are proof being gay is a choice. Trumps statements regarding immigration were also outrageous when he said that Mexico is sending its rapists and criminals to the U.S., calling for a wall along the U.S.- Mexico border. Despite these comments, both Carson and Trump are ranked far ahead of the Republican candidates according to the latest polls.

Trump appeared to be more reserved compared to his last Republican presidential debate performance. During the CNBC Republican presidential debate, Trump refrained from attacking his opponents appealing to some voters who remain skeptical of his brash character. CNBC moderator John Harwood who asked whether his candidacy was “a comic book version of a presidential campaign” noted this. Trump responded passively stating the question was “not very nicely asked” and preceded to plug his proposals.

While the Republicans battle for their spot in the polls the Democrats head into the second round the presidential debates. Clintons lead over Sanders has increased in the past week   by a margin of two to one among primary voters according to the latest NBC News/Wall Street Journal poll. In the new poll, conducted October 25-29, 62 percent of Democrats chose Clinton over Sanders. That is up from Clinton’s 25-point lead indicated by the polls earlier in October, 58 percent to 33 percent. These numbers suggest that Sanders has a lot to improve in the weeks leading to the second round of the Democratic presidential debate.