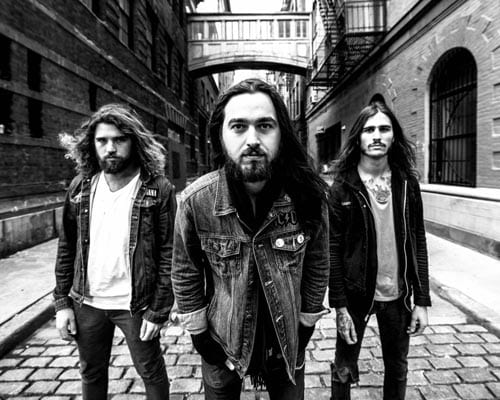 Them Evils rock out a classic sound that is dearly missed in the industry. Reminiscent of those groovy hard rock jams of the late 70s and early 80s, Them Evils brings an original sound illustrated in their single titled “Untold.” Inspired by rock and roll legends, Them Evils is guitarist/vocalist Jordan Griffin, bassist Jake Massanari and drummer David Delaney. Together, they form a powerful three piece that combines classic rock elements with a modern and thematic undertone. A perfect match for a spring tour with The Pretty Reckless that kicks off April 19 in Fullerton, California. But what struck College News was their strong drive and overwhelming sense of ingenuity.

“We were on tour and we didn’t have, like, a cinematographer riding around with us so we just filmed the video for ‘Untold’ on GoPro and an iPhone 7 and made a video out of it!”—Jordan Griffin

Now with new tour dates set, the band readies for the road, preparing for the release of a new upcoming EP. If you haven’t heard of Them Evils, check them out. You can expect to hear a throwback into a realm of rock and roll subsequently proceeding the greatest from the classic rock era.

College News: How did Them Evils get their start?
Jordon Griffin: Well, Jake and I previously lived in Las Vegas. We played music out there in a band. The members out there weren’t as dedicated and there isn’t a scene out there so we moved to California to be closer to LA. We went through a few Craigslist drummers and a through a few of our friends in the local scene and nothing was really sticking until we found David. The rest is history! Here we are now! We finished a tour with The Pretty Reckless and nothing is in our way!

CN: How did your tour go?
JG: Touring is great!  We are a new band but we got a great response from every venue we played. The crowd seemed to dig it! It was a refreshing kind of feeling, because no one hears this kind of music anymore! So, we gave it to them and they dug it!

CN: You have a video for your single “Untold.” What can you tell me about it?
JG: It was done by Ryan Ewing in New York. We were on tour and we didn’t have, like, a cinematographer riding around with us so we just filmed the video for “Untold” on a GoPro and an iPhone 7 and made a video out of it!

CN: So when are you guys getting ready for another recording?
JG: We are going to do about three or four songs in the new year! We are shuffling around with some labels. We plan on going on tour again as well in spring.

CN: What can we expect on your next recordings and tour dates?
JG: Hopefully better than the last stuff! It is going to be a little more classic. That is what we are going for! A bit more groovy and catchier. We are trying to compete with everything else on the radio. Classic Rock is not really in, so we have to make sure it’s good! So it sticks and people listen to it. We have a good team behind us. We are all dedicated and this is what we want to do; people believe and us and we believe in ourselves. We just have to keep on trucking.

Learn more about Them Evils at themevils.com