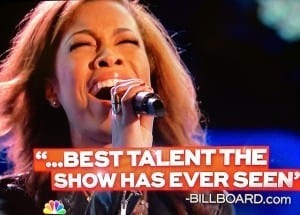 Last night’s episode of the voice marked the second week to the blind auditions. Each coaches team is quickly being filled with some pretty amazing artists thus far! We’ve already seen some frontrunners that are likely to reach the end of the competition.

However, The Voice is one of those singing shows that isn’t always that predictable. Most of the time, the four chair turns don’t always win. They may seem like a frontrunner but then it’ll turn out that they are unable to sing well with others and they fail to advance in the competition.

We also saw a mix of both young and older singers. Kelsie May kicked off the show, a fifteen-year old country singer who sang a classic Loretta Lynn song and managed to get three chairs to turn around for her. She obviously went with Blake, she would have been crazy not to, but Pharrell had a charming pitch to her as well. Adam struggled last week to get any singers to join his team, Christina struggled this week.

Most of the singers are going with Pharrell due to his laid back and humble approach to each contestant. He doesn’t overpitch like Adam or say anything ridiculous like Blake, he just act naturally which makes the artists like him more.

Towards the end of the competition, we saw the show’s oldest contestant. This artist is 52-year-old Barry and he has a very soulful voice. Adam hit his button at the last minute to keep this singers dream alive.

Singer India Carney closed off the show with “New York State Of Mind” and she blew away the judges. This was the only contestant that got a four chair turn on this episode. I’m not going to include Adam Levine’s blind audition in here since it doesn’t really count. Yes, you read that right, Adam Levine decided to do a blind audition but it wasn’t really blind since all the coaches knew that it was him. In my opinion, it was just a waste of time that could’ve gone towards another artist that is actually auditioning.

Sometimes I feel as if the show focuses way too much on the judges when it should really be focused on the artists.