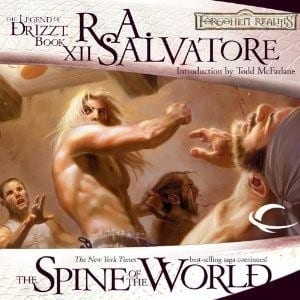 The Barbarian’s Path to Redemption

The Spine of the World
by R.A. Salvatore
(Paths of Darkness #2; Legend of Drizzt #12)
Before I read this book, I thought Wulfgar was a boring side character in the Drizzt series, maybe a copy of Conan the Barbarian, or the third corner to the love triangle between himself, Catti-Brie, and Drizzt. The Spine of the World changed my mind about Wulfgar – this book is about his path to redemption after being torn up by Errtu in more ways than one. The Spine of the World by R.A. Salvatore has become one of my favorite books in the Legend of Drizzt series.
The New Wulfgar: Dealing with Trauma
Wulfgar has returned from the clutches of Errtu, but he experiences a cognitive dissonance: his loved ones (Drizzt, Catti-Brie, Bruenor, and others) see him as the way he was, before being taken by Errtu and tortured for years. They expect him to be the same old Wulfgar that they once knew. That he once knew. However, Wulfgar can’t identify with the man he once was, so he sets off on his own and gets a dead-end job as a bouncer in a bar. He drowns his fears, anxieties, and sorrows in alcohol funded by his new career as a bar bouncer.  He also makes friends with a rogue named Morik.
There’s a difference between understanding his angst on a distant, rational level, and experiencing the same angst in the form of surprise-PTSD-like flashbacks. Finally, I was able to connect to Wulfgar in a way that I hadn’t been able to throughout the series – not only through his trauma, but in his redemption. Knowing that deep down, beneath the fear, was a person with good intentions.
Meralda: Stuck in a Nasty Love Triangle
My initial reaction to the parallel story line about Meralda was one of perplexity. “Who the heck are these people?” I wondered. “Why should I care about them, and how will their paths intersect with that of Wulfgar’s?” Meralda is a beautiful young peasant who is forced, by circumstances, to humor and marry a local lord for the sake of her mother, who is dying from what seems to be cancer. She loves another – Jaka, a handsome, local boy with a head of beautiful curls.
I thought I knew where this was going. Lord Faringal came across as repulsive and moronic, with his odes of love to Meralda when he hadn’t even spoken to her. “Oh,” I figured. “Lord Faringal is the gross nobleman and Jaka is the poor lover.” I rooted for the poor guy until I realized Jaka was a jackass. Meralda is trapped between two men, who are competing for different reasons: love (Faringal) and ego (Jaka). Ultimately, this parallel story turned out to be really good–I wanted it to be its own separate novel with Meralda as its heroine!
Conclusion

The Spine of the World by R.A. Salvatore is about Wulfgar not being able to reconcile his old self (with Drizzt and friends) with his new self (post-Errtu), and fighting against traumas of the past. He tries to run from the past, but ultimately realizes that there is no way to deal with his emotions but to confront them. Meralda’s parallel story was really cool too – I would love for her character to show up in more Forgotten Realms books.

Find out more about The Spine of the World by R.A. Salvatore: