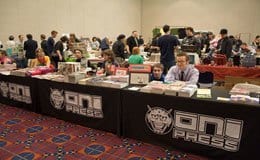 Iron Man has become a household name of late. However, before the hype and craze and CGI ensconced entertainment that both Iron Man and Iron Man 2 delivered, the adventures of Tony Stark were a secret left to comic junkies. Stark’s world never resonated with readers the same way Bruce Wayne’s or Peter Parker’s did. Perhaps the glitz and glamour of a billionaire playboy lifestyle was beyond personal relation for most comic readers. Never the less, shortly before the debut of Marvel’s Iron Man, hoping to catch part of the interest sparked by the feature film, a new comic series was launched. Labeled Invincible Iron Man, helmed by writer Matt Fraction and artist Salvador Larroca, the series hopped on the Shellhead bandwagon. However, consistently excellent storytelling, coupled with deep characterization and nail biting plots have garnered the title an astounding amount of rightly due recognition.

It’s fascinating to observe the unbridled, almost overnight, success of the Iron Man franchise. Rewind the clock a paltry five years and a majority of the general public was unfamiliar with the character. Within the comic reading community, even within certain circles, Tony Stark was seen as a B-list character at best. Fraction and Larroca, with the timely help of Hollywood, were able to alter those perceptions. Fraction brought to Invincible Iron Man a deft grasp of accurate characterization. Understanding what makes Stark tick, Fraction is able to mine new depths left uncovered or untouched by the motion picture. While the silver screen adaptation was able to take liberties with the character, Fraction was restrained largely by the continuity of comics. Despite this, the writer was able to stay true, paying homage, to the past fifty years of Iron Man tales and lore while breaking new ground and adding new layers that enriched the character’s previously limited mythology.

The essence of many comic characters lies in their mythology, who they are, where do they come from, what’s their niche and who is associated with said character. Iron Man lacked a comprehensive mythology due to his sub-popularity. The most gratifying attribute of Fraction’s Invincible Iron Man revitalization is the incorporation and reinforcement of new and old character world building concepts. Fresh blood is added to bolster Iron Man’s supporting cast while familiar faces become even more prevalent. Going back to Fraction’s dexterity with character work, the real meat and potatoes of this ongoing series is the interaction between the cast. There are entire issues were the Iron Man armor is nowhere to be seen. The interpersonal drama, however, more than makes up for the spare action sequences. The dialed back explosions make way for iron tight plotting that is far more interesting than things going boom. While the two films may have shown the mass appeal Iron Man possesses out of the printed page, Invincible Iron Man is proof Shellhead still has plenty of room to expand. This title is indeed fitting for a now A-list character.