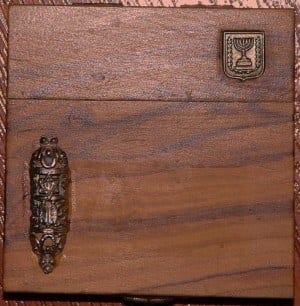 Back in 2004, a small wooden box known as a dibbuk box went up for auction on EBay. The seller was Iosif Nietzke, a Missouri college student, and described the box as a “haunted Jewish wine cabinet box.”

In the box were two locks of hair, one slab of granite, one dried rosebud, one goblet, two wheat pennies, one candlestick and one “dibbuk”—an alleged spirit from Yiddish folklore. Totally common items to store in a box, right?

What’s most mysterious about this dibbuk box are the supposed paranormal events that occurred because of the box. The 2004 Los Angeles Times article detailed the events that allegedly took place.

In the first week of February, the EBay seller wrote “We have definitely seen a tidal wave of bad luck. Most disturbingly, last Tuesday, my hair began to fall out. I’m in my early 20’s and I just got a clean blood test back from the doctor’s…”

Could these strange events indeed be tied to the mysterious dibbuk box? You be the judge.

The EBay buyer was a university museum curator named Jason Haxton who bought the dibbuk box for $280. Since then, the hype surrounding the object has multiplied.

Lionsgate took hold of the idea and turned it into their next big box office hit—The Possession. The film claims to be loosely based on a true story. However, how accurate the movie is compared to the events that allegedly occurred is unknown.

The Possession stars Jeffrey Dean Morgan and Kyra Sedgwick. In the film, their youngest daughter comes across a dibbuk box at a yard sale. She soon becomes unusually obsessed with the box and soon after, terrifying, paranormal events begin happening.

The film is set to be released in theatres on Friday, August 31.