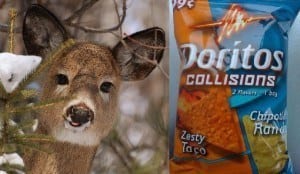 Today’s headlines are full of emotionally-driven stories: the Trayvon Martin case, Nelson Mandela’s failing health but eclipsing them all is the Deer Doritos Bag story. This harrowing tale of personal trauma and extraordinary resolve is touching the minds and hearts of animals and snack foods all across the country.

Coming to us from the Florida Keys the story of the Deer Doritos Bag is one that we sadly hear about more and more these days. On Saturday, June 8 a Big Pine deputy discovered a Key deer that had happened upon a Doritos bag. The Doritos bag inexplicably managed to find its way on top of the deer’s head. Thus a new species of mammal and snack bag was inadvertently created: the Deer Doritos Bag.

The Monroe County sheriff’s deputy rescued the Doritos bag from the deer’s head, but first took a picture of the cross-species; I’m assuming for zoology’s sake. The U.S. Fish and Wildlife Services seem curiously more concerned with the well-being of the Key deer. The Key deer is a sub-species of the Florida Keys. Though once endangered, there are now around 800 in the area. The U.S. Fish and Wildlife Services didn’t comment on the state of the new Deer Doritos Bag, nor snack foods in general.

Typically the life cycle of a snack bag such as Doritos is made up of three stages. Stage 1: Preservation. The snack bag’s first role is as a storage unit that keeps the delicious contents within fresh. Stage 2: Serving Dish. The snack bag (in this case the Deer Doritos Bag) develops into its adolescence as a vessel to hold its snacklings as they are being consumed. Stage 3: Litter. The final period in the life of a snack bag is its saddest. In the twilight of its life, with nothing left but cheese dust and regret, the snack bag is discarded (usually in a wooded area) left to die alone.

News outlets have yet to report on what flavor of Doritos the Deer Doritos Bag contained.