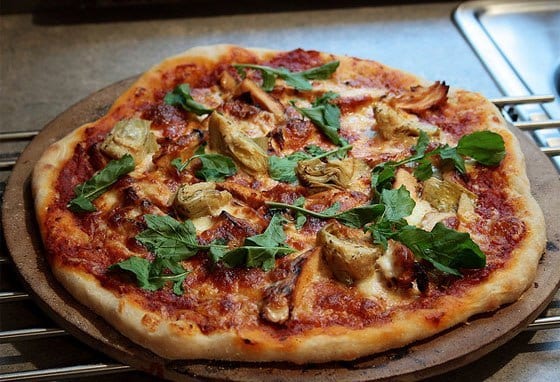 How this delicious confection came to capture the heart of America

It’s a very simple dish: Some bread dough pounded flat, covered with tomato sauce and some Mozzarella cheese scattered on top, baked. Other ingredients can be thrown on (Pepperoni, sausage, black olives, green peppers, onions and anchovies are big favorites), but none of them is essential. In fact, even the tomato sauce and cheese are considered optional; traditional Roman pizza has no tomato sauce (which in some circles would qualify it as Welsh Rarebit), and traditional Sicilian has little or no cheese. There is no pizza equivalent of the Laws of Kosher; people can throw just about anything on flatbread and call it. But if justice prevailed and Pizza were held to the same standards of strictness as German beer or North Carolina tobacco, the defining ingredients would be flat dough, tomato sauce and Mozzarella cheese.

In 1830, the first restaurant specializing in pizza opened: Port’Alba in Naples. And in 1889, Italy’s Queen Margerithe–having discovered Pizza on a holiday in Naples–commissioned Don Raffaele Esposito, Naples’ top pizza chef, to create a pizza fit for royalty. He came up with Pizza Margerithe, a pie combining tomatoes, Mozzarella and basil (red, white and green-the colors of Italy’s flag) for possibly the first time, legitimizing both pizza and the new Italian monarchy in the eyes of the world. Pizza was now popular among all social classes in Italy, and soon after in Spain, France, England and the United States.   An 1890s Chicago street vendor on Taylor Street began selling slices out of his wash tub for “two cents a chaw.” In New York in 1905, Gennaro Lombardi opened America’s first dedicated pizzeria at 53 1/2 Spring Street. The dish wasn’t yet explosively popular; Like Dim Sum or Pho in America today, pizza had its fans and the people who tried it invariably enjoyed it. Pizza stayed in the margins in America until the 1940s, when Ike Sewell’s Pizzeria Uno (and subsequently, Pizzeria Due across the street) opened in Chicago in 1943; three years later, GIs returning from occupied Italy brought a sizable postwar pizza craving with them.

Paparazzi snapped the likes of Frank Sinatra and Joe DiMaggio in pizzerias. L’Oro di Napoli, a 1954 Italian movie starring Sophia Loren as a pizza vendor, made the rounds in America as an art film. That same year, the first Shakey’s Pizza opened in Sacramento in a converted grocery store; its first franchise, in Portland, opened in 1957. In 1958, the first Pizza Hut opened in Wichita, Kansas, followed the next year by its first franchise in Topeka. Straw Hat Pizza, a huge Western chain of California-style pizzerias, debuted in 1959; Pizza Hut bought out the company-owned locales in the 80s, but most of the franchisees kept the name and recipes. And in 1960, Tom and James Monaghan bought DomiNick’s, a pizzeria in Ypsilanti, MI that would eventually become Domino’s, America’s premier delivery pizza. (James promptly swapped his share in the restaurant for Tom’s Volkswagen Beetle; an unfortunate Jacob & Esau-type bargain in hindsight, but it was a really nice Beetle.)

In the last 30 years, pizza has been pushed down some strange roads, Hawaiian pizza being one of the first true deviations from tradition; the ham was acceptable, but the pineapple chunks invited chaos. The 1985 advent of California Pizza Kitchen (whose recipes strongly resembled Wolfgang Puck’s earlier but far less ubiquitous Spago’s specialty pizzas) brazenly threw open the gates. CPK’s toppings include chicken, goat cheese, caramelized pears, barbecue and hoison sauce. Can Socialism and the Metric System be far behind? Although for traditionalists, Papa John’s (whose first restaurant also opened in 1985; now it’s a chain of 3000+ restaurants worldwide ) has always stayed close to the conventional pizza ideal. I’m concerned about their “Philly Cheesesteak Pizza,” though.

Pizza is the immigrant experience in a pan, the Horatio Alger myth given form with mushrooms and melted cheese. The American Dream is predicated on creating wealth from a few humble raw ingredients, and what could be humbler and rawer than pizza ovens and a few bucks’ worth of dough, cheese and tomato sauce? Just look at the vast and numerous empires based on these and little else! No food says “America” more than pizza.

You should also watch: Interviewing yourself in the future