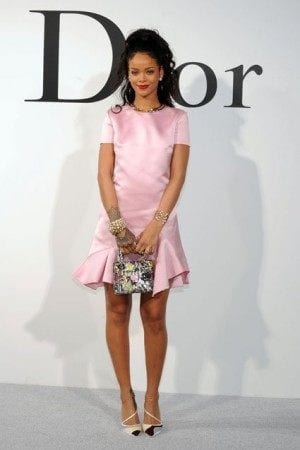 Rihanna seems to be on top of the world right now, with the announcement of her Film 45 theater feature documentary, lending her voice to her character Tip in Home premiering at the end of this month, the news of her becoming Dior’s spokesmodel is now everywhere! Yet, according to Hollywood Life not only is she just going to be joining the exclusive group that includes Charlize Theron and Jennifer Lawrence, she is the first black women to do so. Rihanna is making history as Dior’s first black spokesmodel and will be making her debut in the Spring 2015 campaign. Not only is this a large achievement for Rihanna and showing how iconic she can become, this is a great milestone for Dior. With Rihanna as a spokesmodel, the brand has the chance to potentially spread their influence over a more diverse demographic and expand their customer base. She will be appearing in the fourth episode of Dior’s video series “Secret Garden” where along with other models she will be shown walking through The Palace of Versailles in France wearing beautiful Dior gowns.