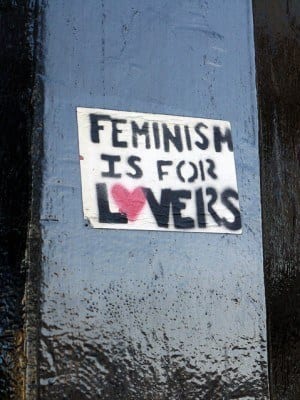 Why it’s not about hating men and burning our bras

I feel awkward calling myself a feminist, though I know I shouldn’t. It’s because I don’t always fit into the popular interpretation of the word as a man-hating, sexually adventurous, perpetually pissed-off woman.

The way my boyfriend (who does believe in gender equality) described it was “Feminism feels like being yelled at for something I didn’t personally do.” And he has a good point. Some people think about feminism in words like “patriarchal society” and “female oppression” and “rape culture.” These things all have validity, but too often they’re used to paint everyone with a broad brush. Are you a cis-gender man with a penis? Then you’re part of the oppressive patriarchal society and it’s your fault women suffer from economic, social, and political discrimination.

Another issue to be found with particular brands of feminism is that sometimes while it claims to be empowering women, it actually allows women to blame society for our issues, thusly playing the victim rather than actually forcing ourselves to make progress. When we complain about the wage gap or rape culture or not being able to have a career and a family, we brush off any personal responsibility. “Society” is not to blame for these flaws. If we’re supposed to be these strong and empowered people, then why aren’t we acting like it?
This isn’t to say we’ve achieved total gender equality – there are still problems that need to be solved. But let’s actually work towards solving them.
Instead of complaining about the wage gap, work so hard that they have no choice but to pay you more. Instead of complaining about how we live in a world that says “don’t get raped” instead of “don’t rape,” start educating other people. Instead of fretting about your career and family coexisting, realize that millions of women do both without any significant damage to either aspect of their lives.
Instead of acting like a victim, recognize that equal opportunity doesn’t mean equal outcome. Women and men, in nearly all cases, do have the same opportunities. It’s what we make of them that’s differing.

Here’s what I think of feminism: neither men nor women are superior, and we need both genders to be empowered and cooperative. People are people, and while we differ in a lot of ways, everyone is a part of our social fabric. There are men in my life I love, and women in my life I love. So how can I say one of these groups is superior? How can I pit them against one another? And how can women expect respect from men if they don’t respect them as well?
Are there issues with how women are treated? Absolutely. But writing this article, or a ranting tumblr post won’t really change that. What will change that is genuine action, be it by volunteering somewhere, educating people, or by just being so kickass at what you do that it doesn’t matter what’s between your legs.
I want to get married and raise kids someday, and that doesn’t make me a bad feminist. Nor does my desire to have serious relationships, instead of numerous sexual escapades. But likewise, women who choose not to start a family, or who do have multiple partners aren’t bad feminists. Neither of us are holding back the cause.
I’m feminine in the conventional sense. And I’m proud of it. But I respect masculinity as well.

I am a feminist.