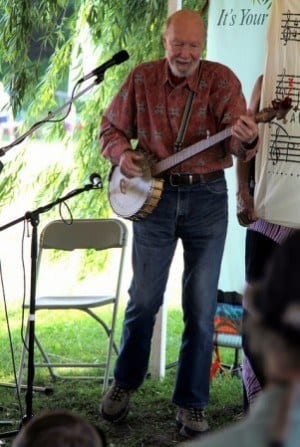 The late and great folk singer and activist Pete Seeger, who’s pictured above, founded Clearwater’s Great Hudson River Revival which is along the Hudson River. He founded the festival with his wife Toshi. Although both passed away over a year ago, the festival still goes on. The festival is held every summer and this year the dates are June 20-21. I also find it important to mention that kids 12 and under get in free so it’s a great and cheap family affair!

The festival has a great family environment with many events catered towards kids. Some of these include: juggling and roving artists, Children’s area, storytelling, river beach combing, vendors for kids, and special performances.

This has become something much bigger than just a music festival. Pete Seeger built the sloop, Clearwater which is a tall boat that has become a classic tourist attraction. Those who attend the festival can take a ride on this timeless boat. Other big events the festival has to offer is: The Handcrafters’ Village which showcases work from crafters and folk artists, workshops, demonstrations, and a booth that teaches you more about the environment, something very important to Pete Seeger and the festival.

Go ahead and buy your tickets now! Early bird tickets are available now through March 23th on the Clearwater Festival website.