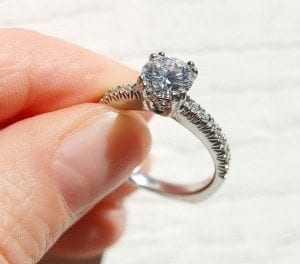 Courtney or Lindzi? Like you didn’t see this one coming…

But you didn’t have to watch The Bachelor this season to figure out that Ben Flajnik proposed to Courtney Robertson at the end of the season. You pretty much just had to stand in line at a grocery store. Who doesn’t casually glance at the headlines on the weeklies?

The big reveal was one of reality television’s worst kept secrets. After trying to silence the popular spoiler Web site Reality Steve back in December, The Bachelor still didn’t manage to keep the match between Ben Flajnik and Courtney Robertson a secret.

Courtney Robertson appeared on the cover of Us Weekly in a neon color-blocked bikini earlier this month, with the headline “Shameless Seduction.” Sources told the magazine Robertson had decided the other contestants “didn’t stand a chance” and that she told her family “she had it all wrapped up.”

Rumors of Ben Flajnik and Courtney Robertson breaking up and getting back together have been flying through the weeklies recently, too.

But The Bachelor had no problems getting ratings Monday night, despite the lack of surprise about Ben’s big decision. The two-hour finale placed second in ratings for the night, with upwards of 30,000 more viewers than The Voice. The Bachelor reunion special made the No. 1 spot for the night.

Poor Lindzi Cox. Her ability to “light up a room” was not enough to win her a proposal from Ben Flajnik.

Lindzi, if your potential fiancé can’t find more to say about you than, “she lights up a room,” he probably wasn’t the guy for you.

On Monday night’s episode of The Bachelor, The Flajnik ladies, aka Ben’s mom and sister, showed up to help Ben Flajnik make his final decision. Viewers may have thought that all the common sense in the Flajnik family was passed down to Julia Flajnik, but then she too was taken in by Courtney Robertson’s charm.

“Maybe girls are intimidated by her beauty,” Julia said.

Maybe it was her beauty, or her long list of Hollywood exes like Jesse Metcalfe, Adrian Grenier, and Reese Witherspoon’s now-husband Jim Toth.

After meeting both girls, Julia pretty much sealed the fate of her brother’s girlfriends. Lindzi Cox would be a “good fit” for her brother, but Courtney Robertson is “an amazing woman.”

From there, Ben Flajnik took Lindzi on a very awkward break-up date. Lindzi was so sure of herself, saying things like, “I want to start a life with you,” and, “This is the first time I’ve been so sure about something.”

Meanwhile, Ben tried to be non-committal and talked about being vulnerable.

After a very Bachelor-style date, complete with snow angels and sledding down a mountain, Ben Flajnik finally popped the question to Courtney Robertson.

In real time, they have since broken up and reportedly gotten back together. We’ll have to wait and see if their renewed commitment lasts much longer than the rounds of morning talk shows.