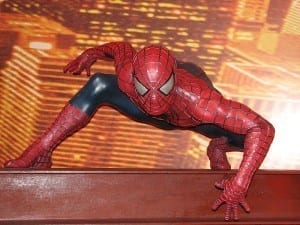 The Amazing Spider-Man 3D trailer has been released and is buzzing all over twitter. The latest installment in the web-slinger series sets Peter Park on a hunt to understand why his parents disappeared when he was younger. Though, his meddling puts him on a crash course with his father’s old partner Dr. Curt Connors, better known as the Lizard from the Marvel comic series.

Marc Webb rounded up a all-star cast for the latest take on the classic Amazing Spider-Man with Andrew Garfield, from “The Social Network,” as Peter Parker/ Spiderman, Emma Stone, from “Easy A” and “Zombieland,” as Gwen Stacy, Martin Sheen, from “The West Wing,” as Been Parker and Rhys Ifans, from “Harry Potter and the Deathly Hallows: Part 1,” as Dr. Curt Connors/ The Lizard.  Dennis Leary, from “Rescue Me,” also makes an appearance as Police Captain George Stacy.

Webb’s version of the movie seems to be much darker than those in past years, which for fans of the comic book superhero that felt Toby Maguire’s portrayal of the webhead missed it’s mark will surely rejoice.

The Amazing Spider-Man 3D will hit theaters July 3 this year.