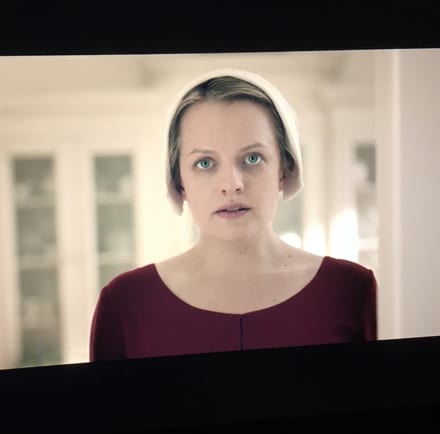 The Handmaid’s Tale won Best Drama at the 2017 Emmys on September 17, making history. This marks the first time a streaming drama has won such an award with Hulu being its producer.

Winning five of the prestigious awards in total, it was a clean sweep for the daring and heart-wrenching drama. Elisabeth Moss humbly accepted the prize for Best Actress alongside her co-star Ann Dowd, who earned the honor of Best Supporting Actress. Moss used her acceptance speech to thank her mother: “You are brave and strong and smart. You have taught me that you can be kind and a f*****g badass.”

Hulu’s shrewd adaption of Margaret Atwood’s acclaimed 1985 novel immediately drew speculation upon its release. Each episode brought with it dispute and passionate conversation, with social platforms erupting after each one had aired. It therefore comes as no surprise that the gritty plot and tense visuals made a lasting impression on viewers.

The story follows June Osbourne, or Offred as she now must be referred, a handmaid whose sole purpose in life is to bear children for barren aristocrats. The Handmaid’s Tale is a bleak look at humankind and the lengths some will go to preserve its existence. Hulu’s choice of actors and actresses could well be the key to their success. Whilst managing to capture Offred’s inner monologue, Moss depicted her struggles and occasional triumphs masterfully throughout the series. The messages of feminism and female resilience within the story have never felt so poignant nor so relevant as they are today. During times of political turmoil, such stories are clearly important to viewers.

This point was made multiple times during the Emmys—jabs at America’s current political structure were made at every opportunity. Setting the tone of the evening, host Stephen Colbert, goaded, “Unlike the presidency, Emmys go to the winner of the popular vote”, which was met with laughter and applause. Ted Cruz and other political figures were in the firing line, but the main source of condemnation was president Donald Trump.

Not only was the evening a triumph for the cast of The Handmaid’s Tale and its writers, it was also an opportunity to praise the story’s conceiver—Margaret Atwood. Atwood received the most adoring roar of cheers and praise as she entered the stage to join the series’ cast. “One take-away would be ‘never believe it can never happen here’, which was one of the premises I used for the book,” Atwood explained in a speech during the awards. “Nothing went into the book that people hadn’t done at some point in time, in some place,” she emphasised. Atwood’s words were meaningful and affecting, much like her compelling tale.

Other winners of the 2017 Emmys included Riz Ahmed for The Night Of (2016), Nicole Kidman and Laura Dern for Big Little Lies (2017) and Charlie Brooker for his role in writing the limited TV series, Black Mirror (2016).