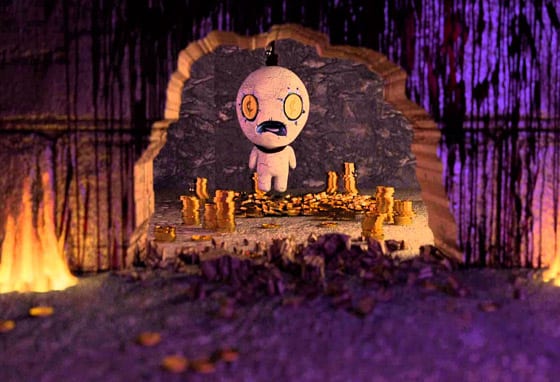 Here is what we know so far about the Binding of Isaac: Afterbirth for PS4

The birthing pains of waiting for The Binding of Isaac: Afterbirth‘s release for PS4 have become almost too cruel to bear. There’s no doubt that every gamer in the know has the same question on their mind: where is it?! To alleviate some of these pains, we’ve gathered all the tidbits of evidence that we could to help keep our fellow impatient gamers fully updated.

You should also read: Warframe Impresses at PaxEast

Has It Been Announced?

Yes. There is definitely going to be a version of The Binding of Isaac: Afterbirth for PS4. The precursor, The Binding of Isaac: Rebirth, is currently available on the PS4 network (if you don’t have it yet, drop everything and go buy it). The DLC Afterbirth was released on October 30th on Steam only, while in September Edmund McMillen announced that the DLC would be available on both PS4 and Vita by the end of the 2015 year. You can find the tantalizingly ambiguous Tweet here, but you’ll probably be as dissatisfied by its lack of details as we are.

Has Anyone Even SEEN It?

Yes. The Binding of Isaac: Afterbirth was demoed at PAX 2015 on the PS4 by one of its developers. While Edmund McMillen has remained strangely quiet about the PS4 version on the Binding of Isaac blog, instead focusing on the PC version, there’s no doubt that a PS4 Afterbirth is in the future.

“until now i don’t think i fully realized how much of a monster this game has become, and this launch in particular had some of the weirdest bugs that caused the most interesting and conspiracy inducing paranoia ive ever experienced in my life (but more on that in a later post).”

Hm. Sounds like Afterbirth was more of a handful than McMillen expected, and it’s currently riddled with game-ruining (albeit fun) bugs. The post goes on to describe the updates that will be put into place to fix what was originally wrong with Afterbirth on PC.

So What’s Going On?

Here we delve into speculation. Given the unexpected problems that The Binding of Isaac: Afterbirth has encountered on the PC, it is highly likely that the Isaac team has not been able to get to working on the PS4 version as they originally expected. It seems as though a great deal of effort is being put into Afterbirth for the PC, which would explain why it’s taking so long for the more polished version to come out on PS4. It’s probably not a bad thing to have to wait for a smoother and bug-free version of The Binding of Isaac: Afterbirth, even if it’s painful. And tormenting.

And in the Meantime?

Fortunately, there are plenty of other games in the market to be checking out, and plenty more in the makes for drooling over. For instance, take a look at Super Meat Boy, another McMillen creation, or start deciding now whether you want Star Wars Battlefront or Fallout 4. If you’re more interested in seeing what’s coming, find out about the amazing No Man’s Sky and start dreaming of next-gen entertainment. It’s definitely been a long wait for The Binding of Isaac: Afterbirth on PS4, and there may be a long wait coming, but at least there’s plenty to go around to keep gamers busy this holiday season.

You will also read: Elgato’s new HD60 Game Capture Card is sexy, but is it necessary?