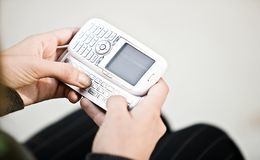 During lecture, Griselda Yanez texts about issues in her relationship, receives updates from her staff and asks how her mom is doing. She hides the phone in her lap to avert the professor’s gaze.

The third-year pre-psychology and Chicano and Chicana studies student from UCLA concedes that texting in class can be a distraction, especially when the lights are dimmed, but believes students should still have the right to text.

According to a survey conducted at Wilkes University, Yanez’s texting behaviors and attitudes aren’t that uncommon among college students.

The idea for the study came after psychology professor Deborah Tindell asked an absent student’s friend to contact her for an assignment. By the time she came back to her office the absent student had emailed her. She concluded that the absent student must’ve received a text from her friend during class.

Tindell and fellow psychology professor Robert Bohlander conducted a 32-question survey to measure the texting habits and attitudes of college students. They received anonymous responses from 269 Wilkes students of all majors and class standings.

About 92 percent of the respondents said they’ve texted in class once or twice, and one-third reported doing so at least once a day, said survey co-author Bohlander. He believes the statistics to be accurate among the national college student population as well.

Bohlander added that while the survey wasn’t originally intended to uncover cheating, it found that 10 percent of Wilkes students said they had sent or received at least one text during an exam, and three percent had indicated that the text had something to do with the exam.

The survey also looked into how much students felt texting in class was a distraction. About 84 percent of students reported hearing phones vibrate and ring in class, but only 25 percent felt that it provided a distraction. Almost two-thirds of the respondents said they felt that phones should be permitted to be set on vibrate during class.

“The bottom line here is that students knows there’s a problem with use of these devices, know it can be used for cheating, know they can be distracting, but they don’t want to give them up,” Bohlander said.

He said the real surprise in the study was not only the sheer amount of texting in class but also how adept students are at texting without people noticing. Larger classes, desks that obscure view of the student and instructors who pay more attention to the screen were all listed as factors that make it easier to text in class.

Bohlander says that faculty members can discourage texting in class by become more interactive with the students, walking to back of the room periodically and making eye contact.

After the study, Tindell and Bohlander have both received feedback from the students. One student admitted to Bohlander that she made a slit in the top of the pocket of her hoodie in order to see her cell phone keyboard as she holds it in the pocket.

Since the release of the study, the faculty at Wilkes have been tightening their restrictions on text usage which prompted a student to tell Tindell jokingly, “Thanks a lot.”