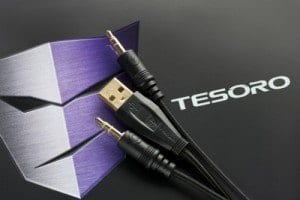 For the last few years, Tesoro has been quietly creeping into the world of PC hardware. Established in 2011, they’ve focused their time on providing gamers with mouse options, keyboard upgrades, and headsets made to rival some of their more expensive rivals. For the last month I’ve had my hands on two of their products, running them through the gamut of gaming to find out just how legit Tesoro is.

PC audio is most easily described as a “crapshoot”. You can get quality sound from a cheap headset, but if you’re looking to maximize quality, comfort, and customization, Tesoro offers the Kuven. Priced at only $79.99, the Kuven is a 5.1 surround sound headset that has surprising quality at high frequency, and noticeable rumbles from bass. It’s comfortable too, and allows easily management during your gaming activities.

Most headsets, when you hold them in the middle of the headband, have ear cups that pinch together. That’s often a sign that the tension is too high and, for those of us with big heads, will lead to discomfort after long periods of use. The Tesoro Kuven has a noticeable gap when held aloft, and the comfort when you put them on is apparent.

They’ve got an over-ear design, so the tension on the sides of your head isn’t terrible, but it’s snug enough not to slide down your face as you move your head around. It uses soft leather, which can be troubling if you sweat a lot, resulting in some disgusting “sticking” to your face. It also advertises memory foam in the ear cups for cushioning, but it wasn’t noticeable enough that it actually molds to your ears. Still, it’s comfortable and that’s what is most important.

One of the my favorite options is the control station. Too often volume controls are placed on the headset itself, resulting in players frantically searching for them during games, or having to remove the headset to find them altogether. With the Kuven control station you can adjust each specific channel, including the voice audio that’s filtering to you. You can also mute your mic or turn the sound off completely, all within arms reach.

The sound itself was glorious, clear and booming exactly how you’d want it to be. I tested it on a number of games, music (including bass tests), and movies to determine where it excelled. Because the audio was so clean, it’s hard to say how you should use this, so just use it for everything. The bass testing was so impressive that it felt like the headset had installed “rumblers” of some sort. And the 5.1 surround sound worked perfectly, both in testing and when watching movies or playing games.

To really see what type of hardware I was dealing with, I cranked the audio to max and then set off to find out exactly how loud these can get. They get loud. A basic decibel meter set inside the headset — not up against the speakers mind you, where your ear would be, but directly in the middle — found that it maxed out at 108.4db, just shy of what most say a “loud rock concert” would do to your hearing.

Moving from audio, I also had the opportunity to “play” with the Tesoro Lobera Supreme, a mechanical keyboard with some notable features. At first glance you’ll notice the beautiful blue backlit keys and a lit border that runs along the sides of the keyboard. Perhaps most important is that Tesoro has found a way to pack in options, but the keyboard itself doesn’t feel bulky. There are no additional buttons along the sides or jammed into gaps.

In the upper-right of the keyboard are multiple hub options, including audio (headphones and mic) and two USB ports. Unless you’re attaching the DC-in plug (a USB cable is included), the USB ports are limited to just 100w of power, meaning you’ll only be plugging in your iPod or a USB mic, nothing with a heavy load.  It’s not that big an issue, considering the options are provided for you in the box, but it can still be a nuisance if you’re trying to conserve USB ports on your PC and you’re forced to give one up and only get two in return.

There are macro options, accessible via downloadable software, but also provided via the keyboard, meaning you can record them on the fly. Without having to specify in the software how you want them set up you can change your tactics easily if you find your enemies doing the same. It’s easy to do too, using only a couple of button presses to accomplish what is normally a more-difficult-than-it-should-be setting with other keyboards. The macros are launched from one of three keys that rest below your spacebar for easy access.

The Tesoro Lobera Supreme seems like a basic keyboard at first glance, albeit with some catchy eye-candy with the lighting and the unique design, but I was really impressed with how much more it really offered. Somehow, with most keyboards getting bigger and bulkier, Tesoro has found a way to pack all the features you’d want in a keyboard into a typically sized option. It’s really impressive.

I’m happy to say that my first experience with Tesoro has been such a positive one. They’ve only been around for three years, so you’d expect either overpriced hardware, or extremely cheap manufacturing. Thankfully, you get neither of them. If you’re looking for a bargain and to get some quality, the Lobera and Kuven embody both.