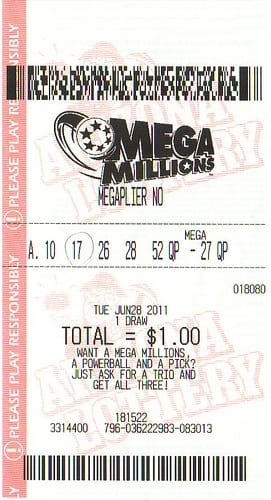 Mega Millions jackpot is up to a ridiculous $640 million, making the whole country rush to their nearest convenient store to try their luck in a game that has a 1 in 176 million chance of winning.  Whether it’s buying a ticket for yourself or going in on an office pool, it’s fair to assume everyone in the country has given at least a dollar to the lottery in the past week.

Playing the Mega Millions isn’t as easy for everyone as one might think.  Apparently, Nevada does not have a lottery so Nevada residents had to travel in order to buy a Mega Millions ticket. At 9 a.m. this morning, 1200 people lined up at the Primm Valley Casino Resorts Lotto Store, which is located just across the border in California. The Washington Post reported that the store, although 40 miles away from the strip, is the closest place to Las Vegas to buy a ticket. Wanna-be ticket holders waited three hours to get their hands on their own numbers.  A director of operations said a Las Vegas boxer came into the store and bought $20,000 worth of tickets on Thursday.

Mega Millions lottery odds of winning seem impossible when compared with other things that are more likely; like getting struck by lightening. The Washington Post reported it is more like to have identical quadruplets than win tonight’s jackpot, which has already broken the record for the largest lottery prize in history.

If no one wins the tonight, it is estimated that the jackpot will rise to almost $1 billion, which would raise an issue as lottery billboards do not have enough digits for the potential prize.