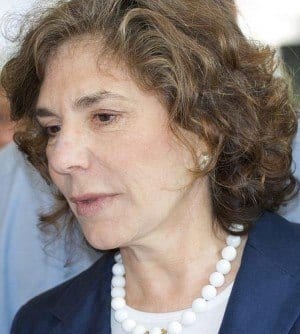 Is now in fair condition after experiencing seizure-like symptoms

Teresa Heinz Kerry, wife of U.S. Secretary of State John Kerry, was hospitalized on Sunday night after experiencing symptoms consistent with a seizure. After being stabilized by doctors at a Nantucket Island hospital, she was flown to Massachusetts General Hospital in Boston.

Heinz Kerry, 74, arrived at the Nantucket Cottage Hospital via ambulance in critical condition. She was stabilized and tests were conducted throughout Sunday night and Monday morning. Her condition is now labeled as fair.

“She is undergoing further evaluation and Secretary of State John Kerry, her son, and other family members remain with Mrs. Heinz Kerry at the hospital in Boston, as they have been since she became ill,” said Kerry spokesman Glen Johnson. “The family is grateful for the outpouring of support it has received and aware of the interest in her condition, but they ask for privacy at this time.”

Teresa Heinz Kerry is heir to the Heinz ketchup fortune after marrying John Heinz, a Pennsylvania senator. John Heinz died in 1991 after his small plane collided with a helicopter, and Heinz Kerry married John Kerry in 2005.

Previously an interpreter for the United Nations, Heinz Kerry became a philanthropist after her first husband’s death and utilized The Heinz Endowments and the Heinz Family Philanthropies to disburse money to a number of environmental causes.

Heinz Kerry was treated for breast cancer in 2009 after her annual mammogram revealed a lump in her left breast. She underwent two lumpectomies late in 2009.

John Kerry spent nearly 2 weeks on a diplomatic trip to the Mideast and Southeast Asia, and returned to the family’s Nantucket home on July 3. He planned on returning to Washington on Monday, along with departing on a trip to Israel at the end of the week. His schedule may have to be rearranged depending on his wife’s health.