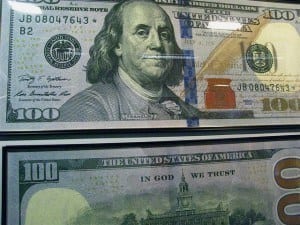 Get ready for a new $100 bill this October, as announced by the Federal Reserve Wednesday.  It will begin circulating nearly two years after its initial target date.

The Federal Reserve has set a new release date for Oct. 8, according to abcnews.com.  The redesigned $100 bill, which looks more like monopoly money than the good, old-fashioned greenbacks to which we Americans are so accustomed, will boast added security features, like a blue, 3-D security ribbon and a disappearing Liberty Bill in an inkwell.

The features are all designed to ward-off counterfeiters, who are becoming better and better and copying money, as home printing machines have become more advanced in recent years.  The $100 bill is the most popular target for counterfeiters.

“We made numerous process changes to address the creasing issue and we are back in full protection,” said Dawn Haley, a spokesman for the Bureau of Engraving and Printing, to ABC News.

Those changes will include modifying the paper feeder on the printing presses to accommodate variations in the paper associated with the 3-D security ribbon.  The blue security ribbon, which is composed of thousands of tiny lenses, magnify the objects underneath them to make them appear to be moving in the opposite direction of the bill’s movement.

As early as 2003, the government began making vast changes to its $20 bill, with peach, blue and green backgrounds.  It was the first time in American history that bills had included colors other than green and black.

An extensive education effort is planned for businesses and consumers around the world to educate them about the new design and how to properly use the bills and to detect whether they are real, according to ABC News.  Information about the new bills can be found at www.newmoney.gov.